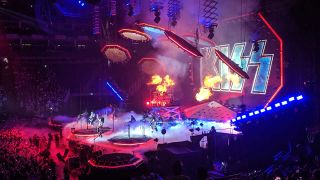 The end is nigh. Kiss are on a farewell tour, and while it's hard to believe they'll stop while the arenas are still full and the coffers still filling, we're obliged to take them at their word.

Last night they played London for the final time, 43 years after they played their first, at the Hammersmith Odeon in 1976. The Odeon set was stuffed with songs that have become part of the rock'n'roll furniture, including half a dozen performed at The O2.

So is this it? A final farewell for rock's most loved, most hated, most cartoonish spectacle? It could just be. And we had to be there.

Kiss are a band who inspire devotion like no other

It's party night in London Rock City. There are families dressed as Kiss, united in pancake across the generations. Groups of friends in business suits and Kiss make-up. Wigs galore. We spotted one group of fans all sporting identical Peter Criss face paint. The Kiss Army prize loyalty like no other group of soldiers, and seize the opportunity to show it.

If Paul Stanley is miming, what the hell is he miming to, and when was it injured?

Paul Stanley's voice is wrecked. It's part wounded animal, part man-of-his-age croak, and if he's getting any technical assistance with the singing it really doesn't paper the cracks.

It's not like he's trying to preserve what's left of that voice: Stanley spends a lot of time in between songs screeching about how crazy we all need to get, showing a reckless disregard for his own throat. And when the band segue from Lick It Up into The Who's Won't Get Fooled Again, that famous Daltrey scream is rendered as a disconsolate wail.

Conversely, he still moves with the loose-limbed charisma of a professional athlete, peacocking around like John Travolta in his prime, fearlessly zip-wiring his way from one end of the arena to the other. Physically, it's a remarkable performance, at any age.

Gene Simmons is still a monster

He stalks. He flicks his tongue. His eyes dart. He breathes fire and drips blood. He licks the neck of his guitar lasciviously. Has rock'n'roll ever come up with a more charismatic combination of creepy and cartoon than The Demon? We doubt it.

While Gene has never been the greatest of singers, that ogreish bellow remains undiminished, and you're left with the impression of a man who still very much loves his work. And loves being Gene Simmons.

Went to see Kiss yesterday with my lovely friend and gigs buddy @donnamariemua and had lots of fun! And I was even able to take some decent pictures #kiss #live #o2arena #london #londongigs #rockgig #genesimmons #paulstanley Autumn_Breeze_xyz

It's better than last time

In fact, it's the best we've seen from Kiss in a while. Last time they played the O2 (in May 2017) they finished with Detroit Rock City. This time they started with it, which somehow feels right.

And maybe this whole farewell tour thing works in everyone's favour. The crowd is bigger, and feels more up for it, knowing this might be their final chance to see Kiss play live. It feels like an event, whereas Kiss shows in the past have often felt like the latest in a long line of performances. Different city, same pyro.

It's quite the show

Kiss's pyrotechnics might feel a little subdued to anyone who saw Rammstein in Milton Keynes, but they're not attempting to turn the arena into Communist bloc industrial wasteland. The Kiss show is pure, whizz-bang entertainment, suitable for all ages.

The band start up near the rafters on hydraulic platforms. The drum riser rises and falls. There are flames and fireworks, and a finale that feels like the climax of a particularly rowdy political convention, with balloons and confetti and streamers and Tommy Thayer whizzing around above our heads in a cherry picker.

You can't dance to an explosion

Yes, Kiss fans come for the pyro. But the band have built up a catalogue of classic rock'n'roll songs, and without those Kiss would be nothing. Sure, no one really needs to hear Psycho Circus or Say Yeah ever again, but the rest are part of rock's glorious canon: Deuce. Love Gun. I Love It Loud. Calling Dr. Love. You know them all.

Highlights? There were two standouts: when a grand piano magically rises from the bowels of the stage and Eric Singer (who really has a voice) performs Beth unaccompanied, mobile phone torches providing a backdrop of stars. And an utterly joyous I Was Made For Lovin' You, with Paul on a small stage at one end of the hall as Gene and Tommy are locked together at the other, rocking back and forth, grinning furiously.

Taking Kiss seriously is a mug's game. But lose your inhibitions for an hour or two, and there aren't many more entertaining way to spend an evening. If this really is the end of the road, they'll leave a gap that won't be easily filled.

Finally... if Gene's dragon boots each weigh as much as a bowling ball, why doesn't he find a different cobbler?