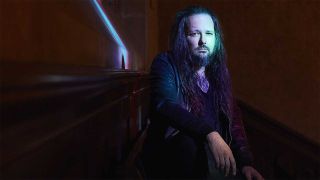 After years in the making, Jonathan Davis has finally released his first solo record, Black Labyrinth. Filled with gothic elements, electronics, world music instrumentation and that unmistakable voice, it’s a personal, experimental record that’s long overdue. We caught up with him to talk about his current influences, the secret solo material’s that’s lurking in his closet, and what we can expect from the upcoming Korn album.

You brought your solo project over to Download earlier this year. How was that?

“I mean, it’s hard to do in the broad-ass fucking daylight – this is a vampire band straight up! In the club when it’s all just red lights and it’s very dark, it’s a different kind of vibe, and it’s really cool. But people were really enjoying it, so I’m very very happy.”

How do your solo shows differ from Korn? Do you feel more relaxed?

“Fuck yeah, Korn’s a huge machine, there’s a lot of moving parts. With this, we’re on one bus, we have very little crew, we’re just like, ‘Boom! Let’s go out and play’. We all smile, and we all go back to the bus and joke, and it’s a different thing.”

“Everything’s been really positive. There’s a couple of knuckleheads, the purest metal fans who’ve been expecting some heavy shit, and I’m like, ‘Well why would I do a solo record when I did that with Korn?’ I need to do something different. Other than that, everybody’s really really happy with it, and I’m stoked on the reception. I sat at a computer for so long, I really didn’t know what to expect, if people would really dig this kind of vibe, but a loooooot of people are into it.”

Where did the world music vibe come from?

“That came from when I did [2002 film] Queen Of The Damned. They wanted different kinds of world music elements in it, because it takes place over different parts of the world, so that’s when I started scoring, and opened my mind to this huge palate of different instruments I’ve never fucked with. I got a bunch of sample libraries and made this stuff, and then I had just basic ideas laid down on the demos. Once we came in to record the record, I wanted it to be as organic as possible, so I had all these great musicians come in and play it live.”

Did you do any research on different countries and instruments?

“I know where most instruments come from; the majority of them are Indian, you’ve got [L.] Shankar doing the double violin – the violin’s not from India, but it’s an Indian style he’s playing – I have tablas, I have sitars, duduks and ouds from Armenia, kalimba, more African instruments. Shit from all over the place.”

What music have you been listening to recently?

“I’ve been listening to 30s and 40s music, really. Like Doris Day, and shit like that – old Big Band music. That music’s amazing. There was no Pro Tools then. You’d go in a studio, they had two tracks, and there’s a huge orchestra and someone’s singing over the top. And then listening to shit my kids are listening to – it’s more like trap music and all the crazy rappers. My son got me into this guy called Scar, and I went and saw him when we played Rock Am Ring.”

“Yeah, he’s UK-based. I went and met him, he almost fucking fell over, he was freaked the fuck out! [Puts on high-pitched voice] ‘Why are you here? What?’ I was like, ‘My son said you’re the shit, I’m coming to check it out’. But I already listened to his music before. I like it, because it’s heavy, he screams his ass off, but it’s trap music. And then I watched the show, and there’s these huge fucking moshpits. So it’s like some hybrid trap thing coming into the metal world – it’s pretty cool.”

You were in at the ground floor on dubstep. Are you going to do trap metal now?

“I started doing trap metal fucking years ago, I just never put it out. I see the new dubstep shows, like these trap artists are just straight taking it metal, using metal guitars and shit. So it’s all good. I like it. I got an ear out there always. So when something grabs me, I know what’s up. I always will. I’m a 14 year old perpetually. I’m gonna be 80 years onstage, while I’ll still be at heart 14. I’m always searching for shit and my kids keep me young. I’m sure my son’s going to have a child, I’ll be a grandpa soon, and that’ll be the next fucking rung of kids that will tell me what shit to listen to. They haven’t steered me wrong.”

Do you think you’re going to go into those realms, with your solo work or Korn?

“I’ve done stuff with trap, I just haven’t released it yet. And I did this crazy heavy black metal jungle shit. I don’t know when that’ll come out, but I did that in 2014. I’ve been doing shit that just sits; I have a big huge vault. I’ve just got to figure out how to release it and do it right.”

What about the trap stuff?

“That shit I did a long time ago, too, and it just sits there, so I don’t know. I’ve kind of moved past it now. And even the jungle black metal stuff, I’ll release it sometime, but I’m always looking out for something new. I’ve got to innovate and do some different shit.”

“I don’t know, I just like shit that makes me move, so I’ve just got to experiment in the lab and throw all my crazy influences in. I’ve been really into old school funk music like The Meters, The Isley Brothers, shit like that. So give me shit that’s funky that makes you dance.”

“I know it’s going to be good. It’s just weird – people don’t understand that usually with Korn records, they write and do all the songs, and then sometimes I get involved in the writing, but lately I come in at the very last minute when it’s been recorded and done, and then that’s when I do my thing. That way I can know where to fill in everything and do my parts. But I think I’m going to get in and do a couple of weeks with them.”

“It’s just more enjoyable if those guys get out what they want to get out. I don’t like to push my shit on them, because I want them to be happy too, because I can be a little overbearing at times. Not that I’m a dick or anything, I’m just like, ‘Ooh, do this like this!’  So with [2016’s] The Serenity Of Suffering, when I heard the songs, I was not impressed, I’ll be honest. I was like, ‘I’ve heard this before.’ But they’re all like, ‘Dude, we love it, it’s good, just do it.’ And I’m like, ‘Okay,’ and then it took me a while to get into it. But after it was said and done, I enjoyed the fuck out of it. Just reprogramming my brain to be not so out of the box, you might say. And I owe that to those guys; they’re my brothers. I’m not gonna be like, ‘Go back and write it, I don’t like it.’ I’m not that guy. So I’ll do my thing, and I think we’ll be doing some new shit, definitely.”

What have you heard so far?

“I’ve listened to a bunch of stuff, there’s been really good ideas, really cool grooves. It really doesn’t start taking place until I get there and glue all the shit together with the arrangements, and put my vocals on it. But they’re working with different producers, and we’re gonna do the record, and we’ll see – I’m really excited for it. And it doesn’t suck, I know that. I’m not going, ‘Go back, please’. I mean, I’m more impressed on these than I was with Serenity Of Suffering, so…”

Is it going to sound like a continuation of Korn, or a new direction?

“We’ll see. Sometimes they write it and then I start fucking fucking with shit, and it turns into some different shit, so that’s when I come in and they get all pissed off, or they just get scared. And I’m like, ‘See? See that feeling right there? That’s progress. When you’re feeling comfortable, no. I want you to be scared.’”

Jonathan Davis' new album Black Labyrinth is out now and available to buy from Amazon.