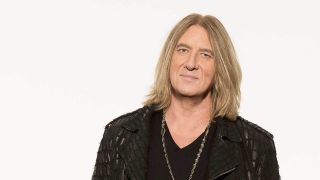 It’s also probably fair to say that band frontman Joe Elliott wasn’t a fan. “When you get on Spotify it’s very insular,” he told Maxim in 2015. “Everybody is on headphones now. It’s just Zombieland, and we’re all guilty of it.”

But that’s all changed. From today, the band’s entire back catalogue is available via Spotify, Apple Music, Deezer, Google Music and Pandora.

Joe, can you give us the background to Def Leppard’s decision to join the digital space, and how long the discussions were going on?

Before he passed away, Howard Kaufman [the band’s manager, at H.K. Management] was very into this deal. We tried to do a deal many years ago, but it didn’t work out, so we just waited and bided our time. Record labels, or any kind of institution like this, keep the same name, but every 18 months you can have totally different people. It’s like a football team: look at any football team from five years ago and see who’s still playing in it today.

We were just very fortunate that the people there [at Universal] at the moment were very onside to doing this deal. We sat down with them, the royal ‘we’ being Howard and Mike Kobayashi, our manager, and basically just batted the stuff back and forth until we all settled on what we thought was a fair deal. So it’s been on the go for a while, but this particular one that we’ve all signed off on, probably a year, maybe.

You’ve been quite vocal in the past about digital services. Did something change your mind? The industry itself is almost unrecognisable from the way it was even a few years ago, of course.

Everything that’s been said in the past is totally irrelevant today, because things change so much.

So yes, it’s highly unrecognisable, except for the fact that there’s still only eight notes, and ‘maybe’ still rhymes with ‘baby,’ and that’s where our focus mostly is. The rest of it you deal with on a case by case basis depending on what you’re talking about, whether you’re setting up a tour or a record deal or doing an album. It’s all different and it depends on the artist.

Why do the deal now?

Because we were off the road, and we could spend some time thinking about this. People throw contracts and stuff at you halfway between New York and Philadelphia and you’ve got your head in another space, and you sign all the wrong things, you don’t take it in. We had the time and the effort to let the guys get on with us and then come back at us, and over the last three or four months it’s all settled into place. It was the last bastion of what we aren’t involved in, and it didn’t make any sense not to be, now that we were in a good place again with Universal. The people that we’re dealing with there are on our side, if you like. They want to make this work, and we always wanted to make it work. We were just handcuffed a little bit by different sets of opinions.

So it wasn’t a case of you resisting?

We’ve been wanting to get this deal on the table for ages, and we just couldn’t do it. There is no bad blood, it’s all good now. We were out of contract with them for the longest time, so we had no connections with them anymore, after Songs From The Sparkle Lounge came out in 2008. Eight months after that album came out, we were technically, physically and everything, out of the record industry. We were self-sufficient and doing our own thing, we were putting out our own re-records and live versions and stuff. We didn’t need to concentrate on this, we were doing ok. We were concentrating more on the live side of things than anything else. When we put the new record out, and it did really well, you go ‘You know what, we really should revisit this deal,’ and that came from both sides. We met in the middle, we shook hands and then we let the grownups take it from there. So it was just a case of the timing was right now when it wasn’t right before.

Do you think digital and physical can live together?

Absolutely. It’s all down to the choice. Some people will go on Spotify, or the streaming site of their choice, listen to an album and go ‘Ok,I’ve heard it, that’s all I care about,’ and they’ll listen to it again in six months’ time. They’re paying their fee to Spotify and that’s all they do. And there’s other people who’ll listen to it on Spotify and go ‘Oh, I’ve so got to buy that record.’ You can take those two isolated incidents into the corner of the room and the one guy is going ‘Why would you consider buying it, what’s the point?’ and the other guy going ‘Because I have to feel it, I have to be able to smell it.’ That’s why there’s multiple choices of food in every restaurant. Everybody has their own way of doing things, and they do rub shoulders. Since 2009 when we did re-records, Mirror Ball, the stuff from Vegas or Detroit or the latest studio record, they sell physically just as well as they did whether they’re streaming or not. In fact there’s an argument that you sell more if you’re streaming than if you’re trying to protect yourself by not streaming.

What’s your current view on the ever-contentious issue of Spotify artist royalties?

I don’t really have one because I’ve never got that far. It’s one of those situations where you read it all the time — hold on here, Lady Gaga, 127 million streams and she just got a cheque for 200 bucks. But maybe there’s a different side to it. Maybe the fact is that those 127 million streams created sales that don’t show up in that cheque, because people went out and bought it, from Amazon or Amoeba Records or whatever. So you get the money there but you can’t really see a correlation, it’s invisible.

A lot of people will go out and buy it, or they’ll buy your merch, or a Def Leppard t-shirt because they’ve been streaming the music. It’s like listening to the radio. If you got played on Radio 1, back in the day, if you made the A-list, you were kind of guaranteed you were going to be on Top Of The Pops. You were going to be in the charts. That we all knew worked, that was a no brainer. What we’ve got now is, they’re still finding their feet. It’s like ‘I’m not sure how this works but I’m sure it does.’

Did you spend any time looking at how other rock catalogues had performed digitally before making your decision, be it Pink Floyd or AC/DC?

I’ll be honest, I never once checked, I didn’t do any ‘Let’s do Aerosmith or like-minded bands, AC/DC, Bon Jovi, U2,’ anybody that’s from the era. Maybe Howard and Mike did, and they may have even mentioned it to me in passing. But we were very insular in this whole thing, it’s like ‘No, this is all about us.’ It didn’t matter what the other guys were doing. They came to us and said ‘This is a good deal, we should take it,’ and that’s as far as it went. I’m ok with that. I didn’t do any comparisons with amounts of streaming, back catalogue, how did it fare before and after, we just said ‘No, this is all about us, this is our deal, it doesn’t matter how anybody else is doing, we’ll see how it works out.’

The only comparisons we were doing was the income we were achieving when our own post-deal recordings were put into play, so that they could make an offer and match what we were already making. It just gave us the opportunity to get the rest of our music that wasn’t available out there, that was the only criterion we were interested in.

How do you listen to music, as a consumer?

At the moment, I’m using Spotify. If I can’t be part of the problem, then I can be part of the solution! I pay my subscription fee, I’m listening to the records and if I like anything I hear, I go out and buy it. It’s all on my laptop, I nip onto Amazon and click my one-click purchase and it’s in the post, I don’t have to leave my house to buy it. I’ve got a wall full of CDs here because I like to read the liner notes.