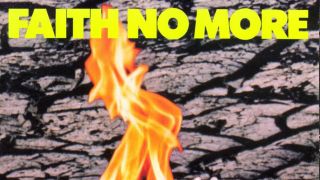 When singer Chuck Mosley left their ranks amid much rancour and rumoured narcotic abuse, Faith No More were a cult rock oddity most notable for their slamming single We Care A Lot, a sardonic stab at crass 80s pop star philanthropy that featured on both of their underground albums.

The addition of new singer Mike Patton, a brattish 21-year-old from Eureka, California who was employed on the strength of demo recordings with his avant-rock band Mr Bungle, brought about something of a musical blood transfusion. Their third album The Real Thing bolted out of the gates with strident opener From Out Of Nowhere and suddenly the pomp of hairspray metal’s days seemed numbered. That their fresh-faced frontman was both good-looking and contrary possibly didn’t harm their cause either.

Unlike contemporaries/rivals Red Hot Chili Peppers and Living Colour, Patton and co were painting from a broader palette. Always a dark and dysfunctional group of conflicting personalities – rumours abounded of their disdain for one another – their talent lay in their successful channelling of post-punk, goth, funk, hardcore and metal into something palatable. Never has a rock band been so much the sum of its different parts.

Underpinned by Billy Gould’s slap bass, second single Epic single-handedly spawned rap-rock and funk metal, and broke the band worldwide. Mixing ethereal atmospherics with prog-ish flourishes, Roddy Bottum’s keyboards gave the band the confidence to release a track such as the instrumental Woodpecker From Mars, whose wailing, Eastern-tinged synths and frantic thrash sections sounded like nothing else. Meanwhile, their cover of Black Sabbath’s War Pigs introduced an entire generation to the early recordings of a band then unrecognisable from their classic line-up. Patton’s vocals too – sneering one moment, roaring the next – were a revelation, borne out by the sheer number of imitators who followed in this album’s wake.

Eight minutes long and moving through a series of dark dramas, the title track is the album’s most proggy song, Patton shifting from gentle crooning to muscular, Black Flag-era Henry Rollins-style hollering. With a technicolour MTV-friendly video, Falling To Pieces brought Faith No More further chart success, yet theirs was a subversive and musically schizophrenic infiltration of mainstream America. The prolonged intro of Zombie Eaters gave way to a heavy song that seemed somehow smarter and more cerebral than many of the thrash metal bands of the day.

Too successful for the punks, too weird for the Mötley Crüe-loving rock masses and too colourful and macho for the alt-rock underground, here was a band who didn’t seem to give much a fuck what anyone thought of them. In that attitude – and this album – lies FNM’s true talent.