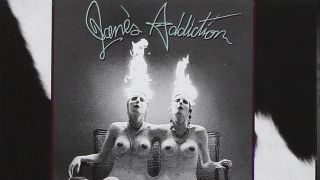 Context is everything and when Jane’s Addiction released this, their first proper album, the rock world was dominated by a clutch of post-Guns N’ Roses/Mötley Crüe-styled groups, signed to capitalise on all things coiffured. Bands such as Poison, LA Guns and Faster Pussycat were where the music industry’s pots of money were being spent.

Though also hailing from Los Angeles, and having cut their teeth on the city’s same club circuit, this rag-tag group of narcotically-inclined surf dudes, street rats and budding shamans were a very different prospect to Axl, Vince and co. Jane’s Addiction were like no one else. Theirs was the sound of a progressive new future for rock, a bold direction previously hinted at on their self-titled 1987 debut (largely recorded live in the studio over the course of one night) but finally fully realised here on their major label debut.

Nothing’s Shocking wasn’t entirely iconoclastic and certainly drew on rock’s rich past – The Doors, Velvet Underground and especially Led Zeppelin are all here in spirit – as well as the more recent post-punk/goth present. Yet from the portentous bass notes and stabbing opening chords of opener Up The Beach it clearly offered a genuine progressive alternative. There were Perry Farrell’s vocals: high-pitched and often favouring emotive wails over lyrics, as on the grandiose Ocean Size, after which the Prog favourites took their name. Young prodigy Dave Navarro’s guitar, meanwhile, somehow sounded both classic and other-worldly; histrionic one moment, understated the next. Producer Dave Jerden was handpicked by Farrell, who admired his work on David Byrne and Brian Eno’s My Life In The Bush Of Ghosts.

Two of their live debut’s finest moments warranted re-recording here – Pigs In Zen and Jane Says, the latter a maudlin and utterly moving acoustic song with some subtle steel drums in the background which documented a friend of the band’s determination to kick her heroin habit. Had A Dad is perhaps the closest Jane’s Addiction came to their funk metal contemporaries Faith No More and Red Hot Chili Peppers but in the epic Mountain Song they left them standing in the dirt lacing their high-tops.

Where other bands flirted with the dark side, listeners just knew that Jane’s were living it: for example, Ted, Just Admit It concerned serial killer Ted Bundy. On Nothing’s Shocking Jane’s Addiction peeled back the skin of modern America to show its dark heart – and in doing so shaped the decade to come.