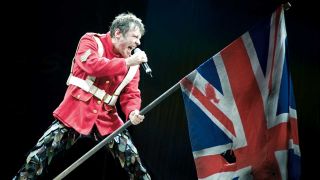 Aside from being fucking awesome, what do Judas Priest, Iron Maiden and Motörhead have in common? That’s right: none of them have been inducted into the Rock And Roll Hall Of Fame. At best, it’s a tricky fact to process. At worst, this is pure insanity. As a result, I do empathise with people that explode in hot pockets of sweaty rage when each new year’s Hall Of Fame inductees are announced and, with crushing inevitability, some of the biggest bands of all time – from any genre – have once again been overlooked in favour of, erm, Janet Jackson and The Cure. It’s almost enough to make us metal folk a bit paranoid about how our genre is perceived by the mainstream... and yet, don’t we know all of this already?

I would argue that getting upset because the Rock And Roll Hall Of Fame are ignoring the metal scene is an extraordinary waste of energy, and not just because we should expect nothing more from an organisation that has decreed that N.W.A. (inducted in 2016) and Joan Jett & The Blackhearts (2015 - name more than one song, I dare you!) are more deserving of acknowledgement for contributing to rock’n’roll’s evolution than Slayer or Megadeth. The most important reason to totally disregard the entire farcical enterprise is that the Rock And Roll Hall Of Fame is a private, profit-making enterprise and in no way reflects the passions of real music fans, let alone metalheads.

Of course, there is always the argument that awards and trophies are basically just nice things and it would be churlish to say no to a bit of innocent praise from a lovely museum in Cleveland, Ohio. It’s certainly true that the Rock And Roll Hall Of Fame organisation is not advocating genocide or selling heroin to children – so far, at least – but it’s not a fucking charity and they have never heard of Bathory. This organisation doesn’t exist to help struggling musicians or to “support the scene, man”. It’s about sticking established, routinely-venerated artists behind glass and charging people a fortune to press their noses up against it.

Meanwhile, at the annual induction ceremony, lots of wealthy, bland, mainstream music industry people and desperately insecure musicians, who should almost certainly have more self-respect, will mingle and network, necking champagne and wanking each other off in an ever accelerating dance of soul-sapping, blank-eyed death before sloping off to the bogs for a massive line of self-satisfaction. If that’s what metal is supposed to aspire to, I think I’ll cut my hair and become a monk.

Unless you think receiving a pat on the head from a bunch of rich people who don’t actually like metal is something to aim for, the Rock And Roll Hall Of Fame is manifestly not for you or your beloved subculture. As is so often the case, Iron Maiden’s Bruce Dickinson hit the nail on the head when he noted that "rock and roll music does not belong in a mausoleum in Cleveland. It's a living, breathing thing, and if you put it in a museum, then it's dead. It's worse than horrible, it's vulgar."

And worse than vulgar, it’s boring. Don’t get angry, just ignore it. It’s not for us.