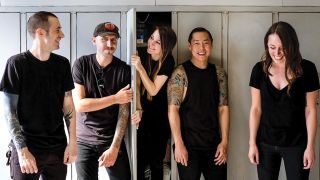 Current Release: .aire is out now on Equal Vision

You’d be forgiven for experiencing post-rock fatigue as of late, with the genre so heavily saturated that it takes something really special for a band to stick out from the crowd. However, Ohio quintet The End Of The Ocean are a breath of fresh air. Coming from a predominantly punk and hardcore background, the group began as an ambient bedroom project before evolving into the sprawling, emotive, dual guitar wielding behemoth they are today. The band’s 2011 debut Pacific.Atlantic was a big hit, swiftly racking up thousands of Spotify plays.

“That was totally out of left-field, I think all of our minds were blown, and still are,” laughs guitarist Kevin Shannon on the album’s success. “It was totally random, nobody expected it and we didn’t push for that to happen. We were just kind of dumbfounded, like, ‘What the heck is going on?’”

With poor pay-outs for artists and a distinct lack of gatefold sleeves, streaming services may not be the discerning prog fan’s format of choice, but The End Of The Ocean take a refreshingly open-minded stance on the service.

“Up until we got with Equal Vision Records, it’s been pretty much DIY,” explains drummer Wes Jackson. “We took the DIY route from punk and hardcore, and when you’re in that scene, people are handing out music for free anyway. Personally I like streaming stuff because you can easily reach more of an audience. As a monetary thing, maybe not so much, but for getting new ears on your music, I love it.”

“I would definitely rather 100 people hear our music for free than only five people hear it paying for it,” says Shannon. “We all work very hard on it, I would hate for it to not be heard. I’d rather people hear it at the expense of us making money, for how hard we worked on it.”

It’s been worth the wait for second full-length .aire, which is a much more mature, well-realised and expansive opus, and looks set to continue that upwards trajectory.

“It took us a while to write this record and to get everyone in one room: we had logistical issues,” Jackson groans. “Mostly it’s just a lot of emotions: frustration, sadness, anger… a lot of what we were all just experiencing over the last few years, as we’ve been trying to get together to write the record itself. We all individually were going through some things over the past few years, some things great, some things not so great, and I think that’s what we just channelled into [the record].”

As for the meaning behind the album’s title…

“I could make it really mysterious and tell you it might be related to a certain Keanu Reeves film… because it is!” laughs Shannon. “I think we definitely pride ourselves on not taking ourselves seriously, and just having fun with what we do with the band. We feel like the genre as a whole is very stiff and rigid, and very serious – which isn’t fully a bad thing obviously, but at the same time, it can seem a little bit convoluted and bland, like there’s no personality to it. We just try to have fun with it, and try to enjoy it and throw some fun into it rather than keeping everything super serious and very stiff.”