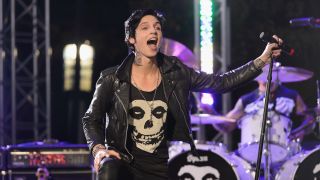 Black Veil Brides are set to release their fourth album on October 27. Self-titled, and produced by the legendary Bob Rock, the album has been described by frontman Andy Biersack as a "heavy, traditional rock 'n' roll" collection. TeamRock caught up with the charismatic frontman in London to find out more.

Wretched And Divine, your last album, was a concept record full of theatrical enhancements, whereas this self-titled album is very different. Are you drawing a line under your past and moving on?

Andy Biersack: “As much as I loved the last record, in some ways the concept album felt like shackles. Lyrically, I couldn’t just write a song. I couldn’t say ‘This shit happened to me yesterday and this is how I’m feeling.’ So this time I wanted to do something different. It was very freeing for me, emotionally, to expel exactly what I wanted to expel this time. I could shoot from the hip and be honest, without worrying about how it fitted into the context of a greater story.

“As much as I loved the last record, it certainly had its limitations. The last record was so theatrical and glittery because [producer] John Feldman is that kind of producer and that’s why I love him. But on this one we wanted to strip a lot of that away and do something with a real feel. We wanted it to sound very meat and potatoes.”

The last couple of albums have been riddled with themes of fighting against the world and standing up for yourself. Again, this one is different.

“On this one, there are no songs about fighting for things. It’s not a call to arms. It really is a true representation of an emotional feeling. The lyrics aren’t necessarily pessimistic, they’re just a lot more realistic. There’s a lot more about how things don’t always work out.”

“It’s personal life stuff. Things change you. Heart Of Fire, for example, is about how time changes you and how much I want to fight that and maintain the burning passion I have for music and the people I love. It’s about me wanting to have a similar feeling to life now as to when I’m, say, 44 or 54.”

Is there an overriding emotion behind the record?

It could be argued that feeling everyone who is against you – as you did on your last records – points to insecurity in you. Does letting that go suggest maturity and newfound confidence?

“Absolutely. I’m so desperately sick of having to talk about how we’re this ‘divisive band’ or a ‘Marmite band’. You know, you try so hard to make something that’s fun and exciting, then all anyone wants to talk about is how no-one likes you. It gets very grinding. I had to let the chip I have on my shoulder about that go.

“So the lyrical content is darker on this record, but the vibe is more positive in that it’s about doing what we want to do without drama or controversy. This album wasn’t written out of anger, angst or wanting to prove anything. It was done because it’s what we love to do.”

Whether you’re tired of it or not, you do always seem to have to justify your band’s existence.

“For the last five years, it has felt like every time we release a record, people are thinking, ‘Jesus, are those clowns together enough to even make an album?’ People have seemed surprised we could even achieve that.

“Now, though, people have started listening to us and that’s a nice feeling. Of course, you have to accept that some people will never listen though. That’s OK, because those people still give me a reason to have a spike up my ass. I’ve still got a reason to fight. But it’s just not everything anymore.”

Over the last few years, Black Veil Brides fell out. But for the first time, you wrote this album in a room together. Has that healed the relationship?

“After Wretched And Divine, we had a falling out as a band. We got to a point where we didn’t want to talk to each other. It wasn’t that we were going to break up, it was more that we had to do all this stuff in order to get us onstage that we hated. That sucked. It really wasn’t fun. I much prefer how it is now – we want to hang out together and do things, as opposed to me going off and being a hermit in my room and resenting everyone else.

“This record really reunited us. The greatest feeling out of all of this is that, regardless of how it does, we had a blast doing it. This is my favourite record in terms of the process of making it. It was completely drama-free, it was fun and it was a really uniting process. If we never make another record, this would be a great memory to go out on.”

Ultimately, it sounds like the intention was that this record should feel real – that it should be a true reflection of you. Do you agree?

“Yes. This feels like the first record we’ve done that is truly without any kind of mask. There’s always a been a veil there – no pun intended. Every record has always had something – giant hair and us drinking whisky, or a concept record with a movie – but this one is just itself.”

“I think so. A couple of years ago, I was all over the place. When you get even a little success, you start to feel the pressure of everyone’s attention on you and I struggled to deal with that. But I feel great now. I’m excited about people hearing the record. I feel more hopeful. I’m confident.”

Black Veil Brides will be released through Lava/Island on October 27. Members of the BVB Army were given an exclusive preview of the album this week in London, and they gave us their first reactions to the band’s new material.