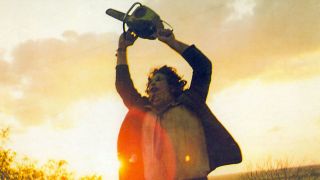 Going seriously deep into his love for bloodshed, Matt has picked his ten (technically twelve) favourite horror movies of all time. There’s a lot to digest, but if you’re still looking for something to keep you up at night, Matt also provided these are runners up: From Beyond, The Omen, House By The Cemetery, Phenomena, 10,000 Maniacs, Redneck Zombies, Zombi 2, Deep Red, The Exorcist, Halloween.

“Before Peter Jackson was adapting Lord Of The Rings and wowing audiences and critics the world over, he was an absolute master of the splatter flick. This film takes the zany cartoonish gore and humour of Evil Dead II and doesn’t so much push the envelope as tear it to shreds and shit all over the scraps.

"Set in 1950s New Zealand, a postcard-ready community becomes the site of an undead massacre, with so many memorable gags including: a zombie baby, a dog eaten by an old woman, a dance party, creative use of a lawnmower and some heavy-handed Freudian symbolism. A true masterpiece.”

“A gripping exercise in nihilistic occult madness, Lucio Fulci, the maestro of gore, brings equal parts over-the-top gore and oppressive atmospherics to this undisputed classic that inspired some of my favourite death metal songs.

"This classic tale of a witch’s coven using a dance academy as cover only gets better with age and has one of the most elegant kill scenes in all of cinema. To continue the Fulci/Argento comparison, the pulsing score by the inimitable Goblin slinks through the film with a sleazy jazz-fusion vibe that perfectly emphasises the kinetic nature of the film.”

“Tobe Hooper created a filthy, violent world in Texas Chainsaw Massacre that has been endlessly imitated, but never surpassed. The hyper-realistic violence is dealt without warning in sudden bursts.

"Leatherface and his family are disturbingly tangible, not spectres or supernatural creatures, but horrifyingly slight distortions of the ‘weird family’ that lives on the edge of town.

"Wisely going in a completely different direction for the sequel, Hooper crafts an outsized parody of the gore genre replete with corny jokes, chilli cook-offs, and of course, human meat. Texas Chainsaw Massacre II satirises the monsters created in the first film to brilliant comedic effect.”

The Wizard Of Gore

“Herschell Gordon Lewis paved the way for the splatter genre, with Blood Feast carving its way into the minds of horror fans in 1963. But that was just the appetiser.

"Wizard… arrived seven years later, and while the plot is nonsensical, the literally stomach-churning gore scenes are ahead of their time and intensely brutal – even today.

"I dig all of his movies, and omitting 10,000 Maniacs from this list was particularly difficult, but this is my favourite of his, and my pick for the most brutal film from the original wave of gore flicks. With plenty of goregrind album sample-ready dialogue, excessive gore and endearing overacting, Wizard Of Gore is a classic.”

“The first film was a masterpiece of DIY cinema, with inventive camerawork, classic dialogue, and that memorable scene where the roots of a tree ‘grab her by the pussy’ a la our current Commander-In-Chief.

"The second was the same story, the same star, but a completely different vibe. Veering off into cartoonish madness, the Lovecraftian storyline is played for laughs as well as shocks. Both movies are essential viewing. Hell, even the remake that came out a few years ago was good.”

Dawn Of The Dead

“This is my favourite film from the master of all things ‘zombie’ – the late, lamented George Romero. This incisive and insightful evisceration of the mindless consumer-culture of America rings even truer today.

"Romero’s skill as a social satirist is at its zenith here, as he set the film in that most quintessentially American of locations. The shopping mall is a natural place to stage an apocalyptic zombie splatter-fest – it’s the place where the American dream and the unique character of American cities went to die.”

“Of all these films, this one made the biggest impression on me as a kid. Again, there is a wonderful playfulness amid the gore and horror at work here, with Richard Band’s shamelessly derivative score working perfectly with the skilful direction. Jeffrey Combs has his star turn here as Dr. Herbert West, Re-Animator.

"Vaguely based on the Lovecraft story that it takes its title from, this is just a great movie from start to finish. The lovely Barbara Crampton also made my pubescent hormones rage in this flick – and again in the excellent From Beyond.

"The scene where Dr. Hill places his re-animated severed head between her legs is forever seared onto my brain. There’s a reason why this movie has inspired so many thrash and death metal tunes.”

“I was torn between this film and The Exorcist, since both are classic films dealing with your pal and mine, Lucifer – The Omen is very strong runner-up in this category as well. Ultimately, the superior direction and soundtrack in Rosemary’s Baby, as well as a lack of spots on this list, forced me to pick it as a favourite.

"This is a remarkable movie because it stands as an objectively great piece of cinema, not just a genre piece. Whatever the depths of Roman Polanski’s failings as a human may be, his skill as a director is unassailable, and is on full-display here. Mia Farrow’s performance is brilliant and the whole film feels profoundly tense and believable.

"There’s a universal appeal to the idea of finding a secret world behind the everyday one we inhabit, and the revelation of that world and how real it feels here is a wonderfully sinister thing to behold.”

“I have to award two spots on this list to my personal favourite horror director, the rightfully lauded Lucio Fulci. Even if this movie didn’t tie in so closely with Sodom’s Obsessed By Cruelty record and the Death song Regurgitated Guts – which was the song title that compelled me to by that Scream Bloody Gore cassette as an impressionable 12 year-old all those years ago – this movie would still be a benchmark for horror cinema.

"The perfect blend of the occult, zombies, and a wonderfully heavy-handed smoke machine operator combine for one of the goriest, darkest films of all time. Bonus points for the best eyeball-violence scene in cinema history here too.”