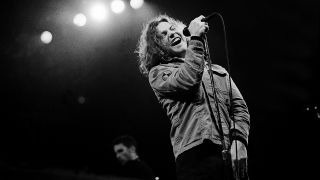 On November 22 2019, Pearl Jam’s third album, Vitalogy, celebrated its 25th birthday. While many other milestones in the Seattle legends' illustrious career have been marked out and honoured, you can bet that this particular event might fly under the radar.

It seems that everyone – from fans, to critics, to the band themselves – have had at least a fleeting moment of trouble with Pearl Jam’s third full length. But with the 50/50 view of hindsight, it is actually the most integral and important album in their back catalogue.

It hardly needs pointing out at this point, but in the early 90s Pearl Jam were a big deal. The success of their hit-stacked, debut album Ten, and its slightly less anthemic, but finely-crafted follow up Vs., had turned these five slacker punks into unintentional superstars.

The pace at which they grew forced the band into situations to which they found themselves ethically opposed – video shoots, endless radio and MTV promo and, most pertinently, into huge, soulless venues controlled by Ticketmaster. Their desperation to escape the trappings of corporate rock, while being in the eye of the grunge storm of the time, drove them further and further away from any semblance of 'playing the game', leading to the infamous spat with the aforementioned ticket vendor over what they saw as a “virtual absolute monopoly on the distribution of tickets to concerts”.

As a result, frictions were becoming more and more common within the band. Bassist Jeff Ament said that “communication was at an all-time low” as Pearl Jam regrouped to record Vitalogy in late 1993. Guitarist Mike McCready was admitted to rehab for a spiralling cocaine addiction, and drummer Dave Abbruzzese replaced by former Red Hot Chili Peppers man Jack Irons towards the end of the sessions.

But the heart of Pearl Jam’s struggles centred around the power play between guitarist Stone Gossard and vocalist Eddie Vedder. Previously, Gossard had been the band mediator – but Vitalogy marked the point where Vedder took the creative reins. It could have gone drastically wrong, and the band could well have split during this period.

Listening back to Vitalogy today, it seems wild that this esoteric, eclectic, lo-fi masterpiece could have been the last slice of Pearl Jam we got. To these ears, it sounds like the sharp left in the road that allowed us to be able to enjoy the band to this very day.

Looking through Pearl Jam’s back catalogue, it’s tempting to wonder how they would have managed to carry on if Vedder hadn’t had put the brakes on with Vitalogy. Would we have got the raw, jam-fuelled Yield a few years down the line, or the garagey scuzz of their 2006 self-titled album – or any of the subtle laments Vedder has shown on his solo material?

All of these tricks feel like they were first concocted on Vitalogy; the loose proto-rock of Whipping, the Petty/Springsteen Americana of Corduroy or the minimalism of Nothingman. All of them point to a blueprint of what the band would become far better than Alive or Even Flow. Crucially, though, they’ve rarely bettered the ideas that are presented on Vitalogy. Despite its experimental nature, it’s an album that has given us some of Pearl Jam’s biggest anthems, from the Grammy winning Spin The Black Circle to the gloriously poignant Better Man.

Of course, it would be a lie to say that it’s all killer and no filler on the album. But even the oddest moments, such as Vedder’s carnival-esque Bugs or the woozy, 60s-inspired boogie of Aye Davanita, at least are capable of raising a smile. These moments were such anathema to the dark and serious public perception of grunge in 1994 that you can’t help but love PJ for adding them in here. It makes Vitalogy the most varied, experimental and startling record in their back catalogue.

The record was given mixed reviews on initial release. That turned into outright hostility as the band continued their refusal to play the music industry game and the suicide of Kurt Cobain halfway through 1994 gave the media a chance to tear down alternative rock and go looking for its next genre to hype.

David Browne of Entertainment Weekly mused that Vitalogy “leaves an odd, unsettling aftertaste. You walk away from it energised, but wondering what price Eddie Vedder, and Pearl Jam, will ultimately pay for it.”

The band, of course, did weather the storm, although it would be disingenuous to suggest that this album was responsible for that. Rather, the experience of coming together to work with Neil Young, one of their collective heroes, on 1995's superb Mirror Ball record, is cited as an important part of the healing process.

Ultimately though, the price the band paid was that they're still here 25 years later, and have long since left the grunge tag behind them. Without the excellence of Vitalogy, it could have been a very different story.