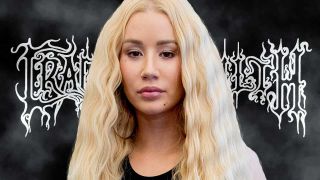 The  ‘Jesus Is C**t’ T-shirt has an illustrious history of controversy. In  1996, Cradle fan Rob Kenyon was arrested and fined £150 in London for  wearing the shirt. Since then, people have been arrested in places as  far afield as Floria, Dorset, Moscow and Australia for the same ‘crime’,  while the T-shirt was banned outright by the New Zealand censors.

Asked to respond by Metal Hammer, Cradle frontman Dani Filth said: “'I wasn’t at all surprised to see my mate Iggy in one of our shirts, as not only has  she extremely good taste when it comes to Black Metal, but the Antipodean rapper and I have been preparing a 'phat as’ co-operation for some time now, we with me performing under my  alternative monicker 'Filthy F**kin’ Fresh’.”

As for Iggy Azalea? We're looking forward to hearing a cover of Lustmord And Wargasm on her next album.