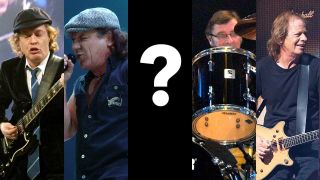 A week ago, if you'd asked 100 AC/DC fans about the man most likely to return to the bosom of the band, Phil Rudd wouldn't have been the first answer on anyone's lips.

And now? He's apparently back, having been pictured outside AC/DC's favourite Vancouver studio. But what of the other half of the rhythm section? So far, there's been no official confirmation, nor unofficial sightings. Who  could it be?

Here's our guide to the runners and riders.

When Cliff announced his retirement from the band in 2016, he said, "Losing Malcolm, the thing with Phil and now with Brian... it’s a changed animal. I feel in my gut it’s the right thing." Well, if the pictures are to believed, Brian's back. And Phil's back. And with those two in place, you can be pretty sure Angus would have made the call. Four long-time members plus Stevie Young? That almost sounds like AC/DC. Odds: 1/3 on.

Everyone loves Duff. He's what David Gilmour's bassist Guy Chambers describes as "a good hang," a man you'd have in your band as much for his personality as for his ability to anchor the bottom end. He knows Angus through the AC/DC-Guns N' Roses exchange programme, he's just come off tour, he didn't commit to The Walking Papers live dates, and he lives just down the road in Seattle. If Cliff doesn't make it, Duff's your man. Odds: 100/30

Not, not that one. Stevie Young has two sons, Stevie "Stitch" Young and Angus "Goose" Young, who both play in Birmingham reggae band Young Culture Collective. It might be a bit of a stretch, but when Doug Dennis, the bass player of Stevie's former band Starfighters died in 2011, the remaining members reformed to play at his wake... and son Angus filled in on bass. And you know how AC/DC like to keep it in the family. Odds: 50/1

What did we say about family? Obviously there's the four Youngs (Angus, Malcolm, Stevie, George), but there's also the band's historic love of familiar ground. Their last three albums? Recorded in the same studio. And when Phil Rudd went rogue, they went back to Chris Slade, who'd served then so well before. So what about the man who played bass on T.N.T, High Voltage, Dirty Deeds Done Dirt Cheap and Let There Be Rock? He's still active (with fellow Aussie rockers Rose Tattoo), and although he may have annoyed his former band mates by publishing his Dirty Deeds: My Life Inside/Outside of AC/DC biography, he is part of the family. Estranged, perhaps. But still family. Odds: 66/1

Can you imagine? Sabbath toured with AC/DC back in 1977, and although Geezer had issues with Malcolm Young art the time, you can't imagine anything but respect existing between the two camps in 2018. Geezer's not busy at the moment, and we'd love to hear his lyrics allied to Angus's riffs. Sounds like a helluva combination. Odds: 100/1

They're in Canada. He's in Canada. He wants to play bass. They need a bass player. That's how this works, right? The idea has already been floated on the Basschat Forum, although, to be fair, Geddy would probably be bored out of his mind playing You Shook Me All Night Long every night. But a man's gotta work. Odds: 150/1

Is there better preparation for an unexpected stint in AC/DC than years in a band who've based their entire sound on the AC/DC template? Probably not. So Airbourne's Justin Street might just be the man for the job. It's as if he's been warming up on the sub's bench his entire life, just waiting for the coach to make that call. He's ready. He's willing. We assume he's Australian. It all adds up, definitely. Odds: 200/1

Because adding a grown woman to rock's most deliciously juvenile band would be absolutely amazing. Odds: 500/1

"I love AC/DC," says the former Nirvana bassist. "I grew up listening to them." While fandom might not qualify anyone for a job in AC/DC, all that political activism can't pay for itself, and Novoselic would bring some much-needed height to the band. One possible obstacle: when Nirvana were inducted into the Rock And Roll Hall Of Fame back in 2014, the night was meant to end on an all-star jam through Highway To Hell. It didn't happen. "They expected Nirvana to learn that song,” said Dave Grohl. "It’s hard enough for Nirvana to learn a fucking Nirvana song." Odds: 1000/1

While Sir Paul's Hofner violin bass might look a little out of place in front of a vast wall of Marshalls, there could be no possible bigger story in rock history than its biggest-selling artist attaching himself to the creators of its biggest-selling album. It'd be like when Ian Gillan joined Black Sabbath - or indeed like when Axl joined AC/DC - but magnified by a factor of many thousands. The news would break the internet, perhaps forever. But we'd pay good money for that Highway To Hey Jude encore. Odds: 10,000/1