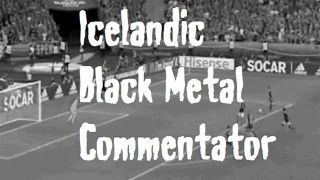 The European championships are in full swing and if you’ve been following the tournament in any capacity then you’ll recognise the voice of Guðmundur Benediktsson. If you’ve been avoiding football like the plague (and if you’re an England fan, we don’t blame you) then Benediktsson is the commentator for Iceland who lost his mind when his home country scored a last-minute winner against Austria.

Of course, this being the internet, the footage couldn’t stop there and the commentary has now been turned into a black metal song by comedy duo Laughbanging, using the music of Icelandic extreme metallers Misþyrming. AND IT IS AMAZING. You might think that the idea sounds a load of old bobbins but it’s hilarious and almost works. Our Online Editor was crying with laughter.

A Metalhead's Guide To... Footballers