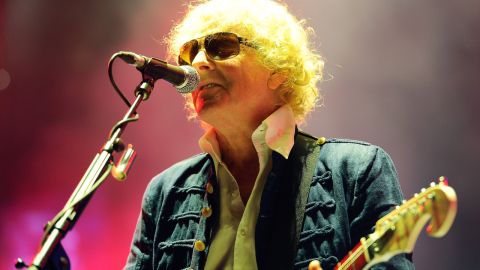 Recorded back in 2002 at the Sentrum Scene in Oslo, Norway, this live album from Ian Hunter was originally released in 2004. Given a fresh lick of paint ten years on, David Quantick says it's "one of the best ever."

In a world where technology, computers, and autotune can make your concery sound exactly like your album, it’s often pointless going to the gig, let alone buying the live recording afterwards. But there are ways round that, and Ian Hunter has found many. This isn’t his first live album – he’s recorded many in a forty-five year long career, both solo and with Mott The Hoople – but it’s arguably his best.

Rock and orchestras can work.

What sets Strings Apart from Hunter’s other work, as the title suggests, is the presence of a string section, augmenting Hunter’s band. However, he’s resisted the temptation (if any) to slow down his rocking numbers, rearrange good songs so they sound pretty instead of exciting, and weigh us down in catgut and syrup. Instead, the strings drive alongside the rockers and add delicacy to the ballads. It’s a very effective combination.

Well, some of them do. This 2004 album was recorded at a time when Hunter was no spring chicken, but his voice, his wit and his intelligence are all sharper than ever. Added to this are an emotional wisdom and sympathy most younger rockers would kill for, as Hunter revisits Mott songs like Roll Away The Stone and All The Way From Memphis (and of course Bowie’s All The Young Dudes) as well as - and this is surely the point of this wonderful record – newer songs from Hunter’s post-2000 career like the 9⁄11 lament Twisted Steel and the triumphant told-you-so rocker 23A Swan Hill. There’s also Mott’s gorgeous I Wish I Was Your Mother, his own wistful yet steely Irene Wilde, and his achingly naked tribute to his friend Mick Ronson, Michael Picasso.

Classic records don’t always come at the start of a career.

Most bands release a stunning debut album and a few more corkers, then tail off once they leave their twenties. Hunter, a late starter in rock terms, tailed off and actually retired in the 1990s, leaving us all to assume he’d gone for ever. But his live and studio records this century have all been incredibly good. And this live album, bringing together every aspect of his career but with a slant towards the emotional and the experienced, is one of the best ever.