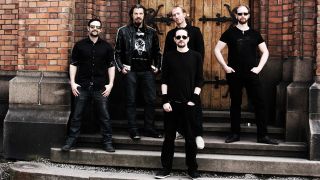 Nothing excites us more at Hammer than seeing modern metal branch out into exciting new forms – and hell knows there is a lot to be excited about on that front right now – but sometimes, you just need good, simple heavy fucking metal to get you through the day. One band happy to oblige are Norwegian crushers I, The Betrayer, who combine the rumbling heavy of Grand Magus with the rock’n’roll hooks of Audrey Horne and the full-blown heavy metal heroics of Blind Guardian. Basically, if you like it metal, this is the band for you.

“We’re a group of guys from very different backgrounds,” explains drummer Terje. “Together we’ve managed to take our favourite parts from each style and meld them into what we consider to be a great representation of us, both as separate artists and as a band. We go from pounding rhythms and low-down riffing to clean, progressive styled passages and soaring vocals!”

The Oslo natives are keen to stress that, while their country may not be seen to be at the forefront of heavy music in the same way it was in the extreme metal boom of the 90s, Norway still has plenty to offer when it comes to the good stuff.

“The local scene here is absolutely filled with bands, most of them young and ready to take on the world with their own brand of metal,” insists Terje. “Plus, metal in Norway is as big and important as it’s ever been! There are numerous festivals like Inferno, Karmøygeddon, Midgardsblot and Tons Of Rock, with very large names in metal usually attending. Not only that, but all the bands on world tours make it a point to stop out here. Put all that together, and the fact that there are always new metal bands being formed, and the general vibe here is that metal is alive and well, and will continue to flourish!”

For I, The Betrayer, the mission is simple: fly the flag for metal as high as they can and take the message of heavy across all four corners of the globe. And they have the nationality to back their brawn.

“I think whenever a discussion about metal goes on enough, Norway is going to come up at one point or another, it’s never far away from the forefront,” muses Terje. “With bands like Kvelertak supporting Ghost, Metallica and Iron Maiden (up the Irons) all over Europe, Dimmu Borgir about to release a new album and Satyricon back in the studio, as well as the high quality of up-and-coming bands, it’s safe to say Norway is well on its way to being right at the front.”

Sounds like: Traditional metal bluster filled with a rock’n’roll soul

10 of the best metal bands from Norway