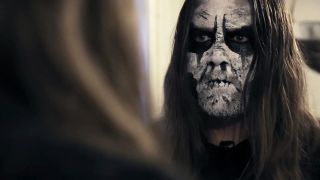 No matter how far Norway’s black metal scene has moved on from its brutal and bloody birth throes, the murders, suicides and church burnings that took place throughout the first half of the 90s have become the cornerstones of a lore that still exerts a pull today.

While Jonas Åkerlund’s Lords Of Chaos movie revisiting that era is still in the works, a feature-length documentary Blackhearts is due for an imminent release. Directed by Christian Falch and Fredrik Horn, and produced by Torstein Parelius, bassist of Norway’s post-black metal experimentalists Manes, it explores the magnetism of his homeland through the eyes of three very different international black metal bands: Greece’s Naer Nataron, Columbia’s Luciferian and From The Vastland, aka Iranian musician Sina. Each band is fimed making a pilgrimage to the country to play at a festival as each finds the weight of their own expectation both vindicated and contradicted by the reality of actually being there.

A wry look at the enduring yet precarious power of myth, Blackhearts delves into the different psyches of its protagonists, given a particular frission due to Naer Mataron frontman Kaiadas’s heavy involvement with notorious Greek far-right nationalist party Golden Dawn, a fact that Blackhearts refuses to shy away from.

The documentary is also about to get its UK premiere at on November 5, 6pm at the Picturehouse Central in Picadilly, London as part of the Doc‘n Roll Film Festival that takes place from November 2-13.

As well as a trailer, we are proud to offer an exclusive short clip, featuring Naer Mataron’s vist to the Fantoft Stave church in Bergen, reconstructed after it was infamously burned down in 1992, its shell featuring on the cover of Burzum’s Aske EP a year later.

“This TeamRock exclusive clip from the documentary Blackhearts,” state the film’s production house, Gammaglimt, “illustrates in many ways the global impact of Norwegian black metal. However, the film is in no way a traditional music documentary about the history of Norwegian black metal. Blackhearts follows three dedicated diehard fans of this genre as they travel to Norway from Iran, Colombia and Greece, and three very different personal stories unfold as we meet them in their home countries and follow them on their journey. We’re really excited to host the UK premiere of Blackhearts at the Doc N’ Roll Film Festival in London November 5, and we’ll be there the introduce the film!”

Dim the lights, turn up the hellfire, make yourself some popcorn on it, and watch the exclusive clip below!

And book tickets for the screening on November 5 here!