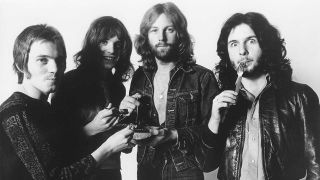 History recalls them as the runt of the litter. In their prime they were considered to be one of the greatest live acts in the world, but they never quite captured that energy and excitement on record, and thus got left behind in the Great British Rock Boom of the late 60s and early 70s.

Yet Humble Pie bestrode the era with a confidence and swagger that few could match. The band formed in 1969 around 22-year-old former Small Faces singer/ guitarist Steve Marriott and 19-year old former pretty-boy guitarist-singer with The Herd, Peter Frampton, augmented by previously unknown 17-year-old drummer Jerry Shirley and 21-year-old former Spooky Tooth bassist Greg Ridley, and the initial idea was to play a mashup of post-psychedelic pop, earth-bound blues, a whisky-tumbler of country roots, and heavy-as-a-hammer rock with a capital ‘R’.

Jimmy Page – a big Small Faces fan who had originally approached Marriott about fronting Led Zeppelin (before Marriott's manager Don Arden threatened to break his fingers) – arguably took many of his ideas for Zeppelin from the full-spectrum direction Humble Pie initially took. As did Rod Stewart’s Faces, Free, and a great many other lesser lights of the era.

Unlike all those other bands, however, Humble Pie had limited commercial success at home: just one hit single, their debut, Natural Born Bugie (No.4) and just one hit album, Smokin’, which reached No.20. In America, however, it was a better story: three chart albums, sold-out tours, and a reputation as one of the shit-hottest bands on the live circuit. But when has commercial success ever been an accurate measure of how good or bad something is?

The truth is, they didn’t release an album that came close to matching the extraordinary power of their live shows. Marriott was living, breathing pyro, and the band were capable of roasting audiences alive. They did, however, eventually realise an impressive and unique catalogue of high-grade material scattered across those albums that makes the tremble-tremble metal and rock-by-numbers young pretenders of today look and sound like the blank ammo they are.

As Marriott sang on one of Humble Pie’s biggest showstoppers: ‘I don’t need no doctor, for my prescription to be filled.’

One of the greatest live albums ever, this is where to begin – in New York, over two nights in May. Not some ‘greatest hits’ package with audience noise tacked on, this is the real motherfucking deal.

Seven monumental tracks over a four-sides of vinyl, with only one original, Stone Cold Fever, and Side 3 and 4 containing one track apiece – the 23-minute I Walk On Gilded Splinters and the 16-minute Rollin’ Stone – this was a standalone masterpiece from a band that only really caught fire on stage.

The closing nine-minute tour-de-force I Don’t Need No Doctor will send you straight to hell. Where you’ll be glad.View Deal

Released two months before the Fillmore shows, Pie’s fourth album was the one where they established their heavyweight credentials. Their last studio album with Frampton, it still contained wonderfully fresh tracks like Shine On and The Light.

While Marriott shows off his vocal range on the sweet country soul of A Song For Jenny, their sulphurous take on Muddy Waters’ Rollin’ Stone made other would-be badasses of the period sound like choirboys. But the steak on the plate was now funky come-git-some rockers like Sour Grain and the thunderous Strange Days. If you wanna know where the Black Crowes learned to fly, look no further.View Deal

Humble Pie’s most broad-spectrum album was actually their debut. Rock, blues, folk, mod… You can still hear the Small Faces influence: the rustic, semiacoustic Growing Closer was written by Small Faces keyboardist Ian McLagan, who rehearsed with Pie before joining the reconfigured Faces; the Marriott-only-credited Bang! and What You Will were originally credited to Marriott and SF bassist Ronnie Lane, and recorded months earlier by ‘French Elvis’ Johnny Halliday.

Delights include the Steppenwolf cover Desperation and the epic Frampton and Marriott demi-title track As Safe As Yesterday.View Deal

Released just months after their debut, the second Humble Pie album was an unexpected departure – and way ahead of the curve that would find everyone from Rod Stewart to Zeppelin coming to embrace the roots music spearheaded suddenly by The Band.

Acoustic guitars, tabla, maracas, sitar, even a plastic cup and a brandy bottle are credited as instruments. An approach that suited Frampton, whose Take Me Back sets the sweet good smoke vibe. Marriott matches the mood with The Sad Bag Of Shaky Jake. Should have put the Rizlas away though before deciding on the cover of Buddy Holly’s Heartbeat.View Deal

Nicknamed the ‘Beardsley Album’, after the Aubrey Beardsley illustration on the cover, the band’s first album under a new deal with A&M was the official relaunch of Humble Pie – and a big step away from its more self-consciously loose predecessor.

From the river-deep blues of Live With Me, to the cock-of-the-walk strut of One Eyed Trouser Snake Rumba, the lite-rock whimsy of Earth And Water Song (written by Frampton in the style that would later transform his solo career) and the big rock drama of Red Light Mama, Red Hot!, this was the firing-on-all-cylinders sound that would shake America.View Deal

Their biggest hit in the US, where it reached No.6, a success built largely on the impact of the Fillmore live double the previous summer. With Frampton gone (replaced by Clem Clemson), Marriott was free to lead the band into full-on kick-ass rock territory. In that respect, Smokin’ delivered on all counts, like opening brace Hot ‘N’ Nasty and The Fixer.

The high point, and best-remembered moment now on classic rock radio, is 30 Days In The Hole. Soulful and sleazy – name-checking cocaine, heroin, a ‘greasy whore’ and varieties of hash – this was not-so humble Marriott truly telling it like it was for him right then.View Deal

With the band having spent most of the previous year touring America, Eat It was recorded on the hoof, a fact belied by the scale of its ambition.

Another vinyl double, side one comprised four Marriott-penned rockers, exemplified by Get Down To It; side two, four soul covers, including the brilliant Black Coffee (even better than the Ike & Tina Turner original); side three, four more Marriott originals, this time all-acoustic; side four, three live numbers recorded in Glasgow, including a Honky Tonk Women that would make Mick Jagger cry.

In truth, variable quality made it – literally – too much. Nobody complained, though. But it was their last big hit.View Deal

It wasn’t all downhill from here, although it sure felt like it at the time. Catching them at London’s Hammersmith Oden in November ’74, Humble Pie still blew like a hurricane. But albums like Thunderbox marked a steep decline in musical cred.

With Marriott co-writing only four (admittedly decent) of its songs, and seven of the remaining eight comprising covers, including, rather unimaginatively, two that had been huge hits just months earlier for Anne Peebles (I Can’t Stand The Rain) and Dobie Grey (Drift Away, here sung in almost mocking style by bassist Greg Ridley fer Chrissakes), only the cool-as-fuck title track sounded truly inspired.View Deal

Four years, 21 tours, three US hit albums – and at the end of it they were broke. It wasn’t just the crazy lifestyle. It was also the suits and cigars that ‘handled’ their money. Marriott left to make a solo album at the same as recording a side project with Ridley. But another US tour was booked anyway and another album was needed to promote it.

So the label and management simply stole the tapes from Marriott’s home studio and turned it into one last Pie album. Although any album on which Marriott sings only five of its 11 tracks, and only three are co-written by him, cannot really be classed as such. Amazingly, some of it is still enjoyable.View Deal