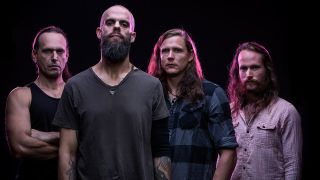 Since its inception back in 1995, Roadburn festival has become infamous as the one-stop shop for all things heavy and counter-culture with its booking of music’s most compelling fringe artists. As well as festival founder Walter Hoeijmakers booking the most exciting underground bands across the weekend, each year Roadburn has a special curator who lends a hand in picking acts for the top two stages. In previous years the likes of Lee Dorrian, Tom G Warrior and Mikael Akerfeldt have tried their hand at curation, and in 2017 it was the turn of Baroness frontman John Baizley.

Baroness themselves headlined the Friday night of the four-day festival, but Roadburn also saw the likes of Amenra, Oathbreaker, Zeal & Ardor, Wear Your Wounds, Deafheaven and Mysticum tear through Tilburg. But how do you choose which bands to play? We caught up with John to find out the process behind building one of the most diverse and interesting bills of the year.

Curating Roadburn must have been a dream come true, right?

“Roadburn is one of the most important festivals for me, personally. This is a festival I’ve come to under different guises – as an audience member, as a visual artist, a musician, I hosted an exhibition. The first year I attended Roadburn it really impressed itself on me how within this relatively small world of ‘heavy’ music, this was the festival that offered potentially the most diversity in its line-up and had a real eye toward things that are contemporary and moving forward and maybe not part of the heavy lexicon yet. So when I was asked to curate I took that idea and tried to push that into the way that I laid out the bands that were on the stages with me, trying to find a good balance of the familiar, the unfamiliar, and the stuff that I knew would work 100% versus something that might require a little leap of faith from the audience. It was all about diversity and working within the community that I have been a part of and not reaching too far outside of that.

“Most of the bands were phone calls; ‘Do you want to do this?’ ‘Yes, we’ll make it work.’ Most of us know that the summer-style festivals, especially here in Europe, can be paydays for bands. We come over and tour in summer because that’s the only way to make money sometimes, so we come over and do the summer rounds in front of all these different crazy audiences, but Roadburn is a different thing – it’s more restricted, more limited, to me it’s a more visionary couple of days and that appeals to me more than any other festival would. The only real strictures on it were that it had to have some element of heavy. I wouldn’t want to bring something that didn’t exhibit that trait, which was easy because most of my friends play in heavy bands ha ha.”

Was there anyone you wanted to get but couldn’t?

“I have to work out my neuroses in notebooks because I don’t remember conversations very well – I don’t think internally, it has to be written or spoken – so I started this notebook and the first page is just my dream list, the acts that I want to put on stage. There were a couple that were so over the top huge, just to remind me that we should aim high, and then some bands that most of this audience are very unfamiliar with, whether it’s because they’re young bands or they spent most of their career out of this realm. It had to be two days of music that were I here as an attendee, they would keep me in one room all day.”

What drew you to the more esoteric, transgressive style of music that Roadburn is famous for?

“I cast a fairly wide net in terms of what I listen to. It’s very important to me personally to always be listening, always keeping my eyes open, and as a result I have been a part of/aware of/a fan of these very far left-field areas of music where things can become very angular, very obtuse, very strange. But I think it’s important to note that pop music isn’t something that’s off the menu for me, it’s just not appropriate here – and I probably couldn’t book a pop band if I tried ha ha.

“For me it’s just about making sure that for each unique, challenging entity, there was a band that would instantly pop off with the audience here, so that when you saw the two extreme scopes of any concept for the band – new bands versus old bands, fast bands or slow bands, lighter versus heavier – there was that balance. I didn’t want to be way out in outer space all day because it doesn’t suit, then it becomes homogenous, extremity can become homogenous. If all you listen to is 400bpm black metal all the time then it loses its impact, conversely if all you listen to is super-commercial radio pop music then its power can also be lessened. I tried to be as entirely diverse as I could in terms of age, style, gender, background of all these bands. I wanted to make sure it wasn’t one-side, if it’s 12 bands then it’s 12-sided.”

Next year’s Roadburn takes place April 19-22 in Tilburg, The Netherlands.

How I fell in love with Roadburn festival