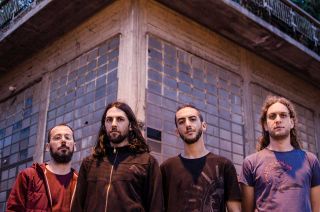 Greek metallers Raw In Sect formed just over a decade ago, initially embracing the technical death metal side of heavy before moving into a more progressive realm.

"[We formed] in order to express something new and push the boundaries of music as far as possible," frontman Kostas Diamandis tells Metal Hammer today.

"In the beginning we would play shows in Athens and other cities in Greece, then with the release of our previous albums (Red Flows and Blue Haze), we would tour excessively all over Europe in order to serve our music the way it deserves."

Raw In Sect's hometown of Athens is the basis for new single Arena, taken from the band's upcoming third album Kitro. We caught up with Kostas to talk about the influence of the city, their new album and what's going on in the Greek metal scene right now.

How does Kitro fit into your catalogue? Does it continue on similar themes?

"The truth is that we have made major changes in our music since we first started, but the principle is the same: to follow what inspires us and go all the way with it. We are picking a colour for every record, so Kitro is the yellow one. Kitro is a fruit that has a sour and bitter taste, but once you eat it, it leaves a sweetness in your mouth. It symbolises all those bitter and sour things we need to accept in order to grow – once we do that there is a sweet reward for everyone."

How does it compare to previous albums?

"We have always had Greek elements in our music, but they were kind of covered by the intensity of the typical metal sound. In this record we feel that we somehow got rid of that in order to bring our identity toward the surface. Red Flows was kind of prog/thrash/death, while Blue Haze was a lot more experimental and progressive. Kitro cannot be defined by those terms as it involves the wide emotional range of rock music but in a way that we haven't heard before from other bands, as it is highly influenced by all aspects of Greek music. One only has to listen to Kitro to understand why we keep saying that."

Arena is about Athens – why?

"First off, the two words are connected and sound similar – Athens in Greek is called Athena, and resembles the word Arena. There are a lot of sights in Athens that you won't get to see in tourist guides but are a reality for those who live in the city. That reality is at times very much like an arena as there is a lot of struggle going on, and there's a lot of aggression and uncertainty in the air. The song is about people's everyday lives and how they fight in order to survive both mentally and physically. Athens is our arena, but each person can identify with wherever they are living."

Do other songs on the album follow a similar theme?

"Kitro is about accepting things in order to grow. Arena is about pulling yourself together in an endless routine and accepting that situation. Therion is about getting in touch with the beast within you and accepting your primitive instincts – so each song is different, but they are all tied together. For example, there is another song on the record called Trauma that describes how an individual is emotionally tied to his/her wounds, they're addicted to them, making them a source of motivation, so they have to accept that in order heal themselves."

How much does living in Athens affect the music you create?

"We are actually based close to Athens now, but we do get a taste of the city in various activities. The feeling that the city faces all sorts of trouble from time to time, yet still remains full of life, creates amazing patterns for us to experiment on. It's  a really great place for people who want to get inspired, and that's why artists from all over the world visit the city a lot. But we involve Greek culture so heavily in our music because we get this this feeling, not from the city or country itself, but from the fact that our memories and aesthetic have been built upon it. You are drawn to what has made you who you are, and if you find the courage to accept the bitterness and sourness of it all, you will be rewarded. For us the reward was the record itself."

What is the Greek metal scene like right now? Any bands we should look out for?

"The Greek metal scene is always busy with bands of any type of music you can imagine. Rotting Christ have paved the way for so many musicians in the extreme sound. Planet Of Zeus are getting more and more popular, and are touring Europe right now. Bazooka are an upcoming punk/rock act who are passionate enough to convince anyone. Suicidal Angels have become one the leading thrash metal bands that operate worldwide. Nightstalker, Poem, Maplerun, Sickening Horror, Released Anger, Order Of The Black Jacket..."

What does the rest of the year hold for Raw In Sect?

"We expect it to be really busy,  starting with a new album presentation show in Athens on May 11, and then do some dates in Greece. Kitro is out on July 6, so after that we will be working on a tour that should cover most parts of Europe, just like we did on our previous records. We can't wait!"

Kitro is available to pre-order now from Amazon.