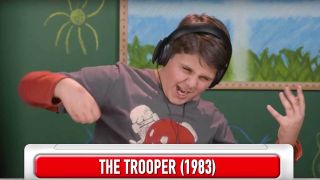 These children have probably never heard of Paul Di’Anno. They’ve almost certainly unfamiliar with Blaze Bayley’s finest work. But this video captures them confronting Bruce Dickinson and Co. for the very first time.

Run To The Hills elicits responses from “I’m not a fan” to “the guitar person is really good at it” via “the ending part is crazy”, while The Number Of The Beast prompts one listener to ask, “why do they have all that screaming in the background?”

Perhaps our favourite comment is “this one has yelling too” after a few seconds of The Trooper, although it might be matched by “Another slow one, guessing it’s going to go fast”, when Hallowed Be Thy Name is heard.

At the end of the video the kids are shown a selection of Maiden cover designs, which make exactly the kind of impression you’d expect with children of such an impressionable age. “The skulls are trying to stare into my soul,” says one, “and are saying ‘Buy this album!’”. And this might just be the most profound piece of music criticism we’ve heard this year.

Check out the full video below.