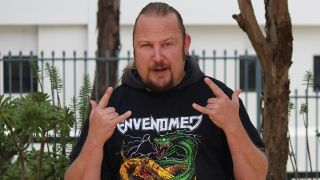 We metalheads are proud of putting on a united front. For anyone who’s ever spent a rainy Wednesday night watching death metal bands blow the roof off of London’s Underworld, or crowdsurfing around Satan’s Hollow in Manchester, we all certainly like to think that we belong to the world’s biggest exclusive club.

Whether your favourite band is Iron Maiden or The Black Dahlia Murder, we’re all on the same team, and our shared interests are far bigger than any differences we might have (occasional online bickering aside).

In 2014, one metal promoter living in Australia decided to take the whole concept of the metal world being united just a little further than most, putting on an event that’d unite Aussie metalheads across the nation.

Dubbed Metal United Down Under, it would see more than a dozen shows take place in one night right across Australia – no small feat in the sixth biggest country on the planet.

“We had 14 shows in the same night under the Metal United banner,” confirms Michael Lüders. “The idea was to unite the scattered metal scene of the continent in the only possible way – shows at the same time! The feeling of community, doing something together despite distance and enjoying a night of metal hit a spot.”

The event was a huge success and has become a staple of the Australian metal scene – “just last weekend the seventh instalment of Metal United Down Under took place!” Michael tells us. So, naturally, the idea to take things even further soon reared its head.

“From the idea of uniting a scattered scene in Australia, the idea of uniting the world was born,” says Michael, a German native who has spent the last decade living Down Under. Naturally, though, taking the Metal United concept international brought on some serious logistical challenges. Put short: you can’t just make a couple of phone calls and let fate do the rest. “It’s a lot of work, and I’m pretty much on my own,” Michael admits.

“The promoters takes care of organising the shows in their cities and countries, but I have to recruit the promoters. I have written to a few hundred over the last three years. Some don’t answer, some are offended by my request, some are interested but don’t have the time or capacity, some don’t understand the idea. Particularly with English not being most of the promoters’ first language, it’s been… interesting!”

Soon, though, Michael united enough interested parties to start setting some wheels in motion, and before long something very special was beginning to come together.

“The first one to jump on board for Metal United Worldwide was actually a well-known Mongolian promoter,” he reveals. “I was so grateful!”

After getting a few more promoters on board, Michael began to sow the seeds for what would become the very first Metal United Worldwide event in 2018, with no fewer than 43 countries putting on shows across 64 cities in the same evening. It went down so well that Michael was able to bring the event back in June this year.

“We had 39 countries participating this year,” he explains, “but because Australia and China participated with a (multiple) number of cities, we had 64 cities overall once again! It was around 400 bands! We had shows in Papua New Guinea, Mozambique, Paraguay, Latvia, Indonesia, Venezuela… we had a show in Algeria in a small movie theatre where everyone was seated!”

The Metal Worldwide event enabled everyone involved to indulge in an extra level of kinship rarely felt even in the metal scene – and while Michael was too hands-on to be able to sit back and appreciate it on the night, he had a reliable hand who was able to see it all unfolding in real time across the world.

“My wife was in her last month of pregnancy and had to stay home while I was at the Sydney show,” he explains. “She watched all the live streams going live on Facebook. She watched Syria and Latvia simultaneously, went to bed, woke up and tuned into the shows in Latin America!”

Needless to say, Michael and Metal Worldwide is only just getting started, and when it comes to the future, there are only two goals: bigger and better.

“I’m aiming for 50 countries in 2020!” he beams. “Metal United now also has its own song [Metal United by Melbourne thrashers Envenomed], which I find really cool. Maybe I can get a show in a tent in Bahrain, or in front of a temple in Indonesia! In any case, attention and participation has been growing and we expect it to grow further.”

As for what metal fans can do to help Metal United achieve its ambitions and help it become one of the biggest and most unique events in the metal calendar every year, Michael has plenty of ideas.

“Follow us on Facebook and YouTube!” he begins, before adding: “Participate in discussions. Watch the videos where we have playlists of almost all of the shows with the bands playing. Just join in. It’s all about participating. It’s all completely free – for fans, bands, promoters and partners. Metal United Worldwide is about doing something together.”

For information on Metal United Worldwide 2020, head to www.metal-united-world-wide.com