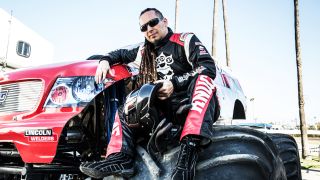 “I’d call it ‘insanity’! I’m definitely someone who loves doing crazy things, but this is an actual monster truck race. You’ve got a set time to run, there are jumps that you have to hit and you’re competing against professional drivers. It’s extremely violent when you take off on one of those trucks because you’re in a 10,000lb vehicle with a 1700 horsepower engine - it’s a drag racing engine that runs on alcohol and if I hit it too hard, it could flip and crash.”

How do you even get in the mindframe to do something like this?

“It’s all about balls, man. A friend of mine who’s a promoter for monster truck shows asked me if I’d ever want to jump into a monster truck. We thought I’d just drive one and check it off the bucket list, but then I met the 2005 freestyle world champion, Jimmy Creten, who actually built a truck for me. I went out to the facility to practise jumping and as soon as people heard what I was doing, race promoters started asking if I could drive the truck in a show.”

“Yeah, at that point, I realised, ‘Oh well, I guess I have to do it now!’ Ha ha ha! Tonight is my official public debut and it’s sold out — these events always sell out — so there are a ton of people here, so if I smash my face, the news is going to be all over the place!”

What’s the worst that could happen?!

“Well, you can crash the truck and it can catch on fire, that’s one of the things that could happen if things go sideways. I broke my helmet once. Let’s say you jump so violently that your head hits the steering wheel and you’re knocked out. Somebody has to shut down the truck before it ploughs into the crowd… Needless to say, my band are not too happy about this. They’re always like, ‘Come on, dude, really?’”

“It’s another adrenaline rush. It’s the same thing with fighting. When I compete in any kind of martial arts tournament, instead of getting nervous, I become relaxed. When I’m driving the truck and I hit a ramp and I know I’m about to catch some serious air, I feel this calmness from knowing that I’m at the mercy of the moment and whatever happens, happens.”

So it’s not for the fainthearted…

“It’s difficult to explain, but I get this extreme sense of silence and calm. I sit behind the wheel and the whole world goes away. It’s just me and 1700 hp and the ramp, and one of us will win, ha ha ha! Same thing with martial arts and playing guitar. When I walk out onstage there’s a deep silence around me and it’s like, ‘OK, let’s pull the trigger,’ and away we go.”

On a scale of one-10, how metal is driving a monster truck?

“This is absolutely an 11. I would compare this to BASE jumping into a semi-active volcano. It’s violent as fuck. Think about it, you’re pulling 30-foot jumps with a 10,000lb truck and if you don’t come down on the tyres, you’re going to straight up crash it and it could burst into flames. So I’d say that it’s metal as hell!”

A History Channel special that offers a glimpse into the fascinating history behind these beasty motors, along with some classic, carnage-filled footage.

A simple, no-frills guide to the biggest and baddest trucks around, including a look through a history of the competitions and drivers involved.

Held every year at the Santa Pod Raceway in Northants, this is your chance to catch the cars in action! Petrolheads, this is for you. Just don’t try this at home… even if you can get hold of a monster truck…