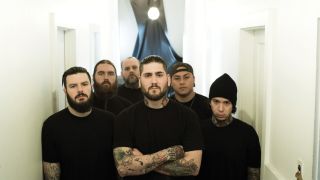 2015 has been a year of great change for deathcore diehards Fit For An Autopsy.

Not only has it seen new frontman Joe Badolato join the New Jersey bruisers’ ranks, but new album Absolute Hope Absolute Hell also sees the band moving away from a generic sound and finding their own voice. The response so far has been overwhelmingly positive.

“We needed our own identity,” explains guitarist Will Putney. “And I wanted to incorporate more of a sense of mood into a heavy style of playing, inspired by the music I listen to outside of metal.”

“My tastes have really changed, especially after eight years of recording music,” continues Will, a renowned producer of albums by Body Count, Miss May I and many more. “Now, the vision for us is focused. I know how I want songs to feel, because I’ve been groomed by this daily intake of music. It’s brought a lot of clarity to the band.”

Getting Joe on board has had a similarly significant part to play in enabling the band – completed by guitarists Tim Dowley and Pat Sheridan, bassist Shane Slade and drummer Josean Orta – to open the door to a newly refined identity:

“Joe has a vast range of voices and styles we can take advantage of. There are no limitations now.”

Liberated, FFAA have by no means finished pushing deathcore into more adventurous territory.

“I think I’ll take the songs into more extreme directions on the next record… really pick a vibe or mood and go deeper into it,” says Will. “I’m looking forward to pushing the guys!”

So what can we expect when this reborn band get out on the road to spread the word?

“We’ll yell a lot and headbang,” he continues. “Tim’s beard will splash water at you, Pat will probably spit at you. It’s gross and scary. Wear a helmet!”

Absolute Hope Absolute Hell is out now via eOne