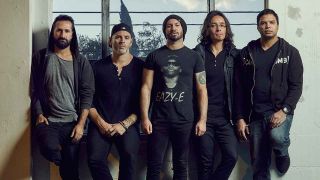 We’re still not sure who Stan is, but progressive metallers Periphery are celebrating him on their sixth record: Periphery IV: Hail Stan. For the follow-up to 2016’s Periphery III: Select Difficulty, they left Sumerian records and struck out on their own, spending a year crafting the record.

More experimental than ever, it opens with a 16-minute track featuring guest vocals from Mikee Goodman of Sikth. They tell Hammer why Periphery IV: Hail Stan is a true expression of the band, and why they’ll never compromise on their music.

What was the intention behind the new record, Periphery IV: Hail Stan? Did you feel any pressure at this stage in your career to do something more commercially viable?

Spencer Sotelo (vocals): “I don’t think we had a clear vision of anything when we started writing the record. We had never taken more than three or four months to write a record, but this time we took a year. We’re all really good friends, we like spending time with each other, so we just sat down and let it flow as naturally as it could – a bunch of friends getting together and making the music that they love. We never thought about, ‘Oh this is going to be this record’ or, ‘This will represent this in our career.”

Jake Bowen (guitar, programming): “At any given point there are demos floating around. And we will always let them float around and remind each other, ‘You remember this? What can we do with that?’ or whatever. That happens on virtually every album we release, and we’ve got better as a collective at knowing each other’s tastes. So, when we do throw these demos around I think we’ve reached a point in time where we are more acutely aware of what will and won’t fly with each of us. And if we’re happy individually with the music, then it’s probably going to be quite an interesting and eclectic record, because we all like very different stuff.”

Spencer: “Yeah, I don’t listen to metal. I don’t really feel the need as I get older to actually listen and to seek out new heavy bands, that’s just not what excites me anymore. But it does feel good to get onstage and express that, so I don’t think that we’ll ever lose that completely, but I am keen to try and bring some more melodic influences to the band, and to actually use my voice. But finding that balance between all of us is part of the fun, isn’t it.”

This album is quite vast. Do you feel like you’ve moved far away from the whole djent scene at this point? Does it even still exist?

Jake: “Oh, it definitely still exists. There are some really great bands that are doing the tech, djent, whatever you wish to label it as, thing at the moment. And a lot of them are our friends, and a lot of them are making great music right now. I don’t think that it’s going anywhere; I think it’s still really healthy.”

Spencer: “Do we fit into that, though? I don’t want to make it sound like we think we’re above anything or...”

Jake: “Sure. But we really think of ourselves as a progressive metal band. I do think that we are a little different to the core values of that sound at this point. It’s been a huge honour to have seen that movement grow, and to be considered such a big part of it, but I’m not sure that this latest record could really be considered a djent record.”

Spencer: “I mean, the first track on the record is 16 minutes long! That’s a very prog idea.”

Spencer: “I guess... That’s what we’ve been told, but we never really thought too much about it. We liked the song, it’s a great opening track, it just felt right, you know. We were going onto this new chapter of our career and we were on a new label, and it just felt like a cool opening statement to make as this new part of our band’s life begins.”

Jake: “I’ll be honest with you, I never thought about it. I never considered the length of the song to be a problem. I just thought it was the right way to start this record. It’s not done as a ‘fuck you’ to anyone, or to be contrary, or any of those things, it’s simply the place that we felt the song was best served. The idea that we endlessly consider those kinds of things is pretty funny to me, because we just don’t. The music we make is the music we make.”

There was a suggestion from your old label boss at Sumerian Records, Ash Avildsen, that you guys could think a little bit more about the commercial direction that you take and be more successful for it.

Spencer: “Yeah we saw that. I mean, Ash is a great guy, and he’s a great businessman, and he’s been really great for us in our career. We really don’t have anything bad to say about him, he’s kind of a genius at that stuff, and he’s made some really brilliantly savvy commercial decisions with some of his bands. But that’s not us. We’re never going to think like that, and I knew that it drove him mad, so I look at those comments and I think it’s just someone showing how much they care about us.”

Jake: “Yeah, we can’t be mad. He’s saying that he thinks we should be a much bigger band. It’s a compliment, for sure. I know we’ve got a bit of a reputation and I know that people think we’re really hard work as a band. But it’s our band and we are going to do the thing that we want to do with it. I can’t compromise in that respect, and I know that none of the guys in this band could compromise on that. It’s just way more important to us than any level of celebrity could ever possibly make us.”

Spencer: “We drive our manager crazy, and he is constantly berating us for it. When the 16-minute song came out as the first track, he was like, ‘Are you sure? Are you sure you want to do this?’. And when we were adamant, you could see his cheeks puff out and his shoulders drop and it spoke volumes, you know. ‘You guys are going to make me have to work so hard... again!’ But he believes in us and he trusts our artistic vision. I feel really lucky that we have worked our way up from this underground scene of really challenging and difficult technical metal music, and people still care enough about us. That’s a real achievement. We’re already way in credit, we’re not going to start thinking about that stuff now.”

You don’t ever think you could have made more of your career commercially?

Jake: “Maybe, we could have done, maybe. But at what point do you have to start thinking about your music in too clinical a way? It just doesn’t sound like fun to us to have those thoughts running through our head. I’m just not sure we’d be the same band, and as good a band.”

Spencer: “I feel pretty privileged that we can play whatever music it is that we want to play and people will still come and see us and think, ‘Yes! This is it!’. And we never have to worry about what anyone else thinks about what we do. That’s an amazing position to be in.”

You’ve got Mikee Goodman from Sikth appearing on the record. How did that come about and what does Mikee mean to you as a vocalist?

Jake: “Without Sikth there would be no Periphery, I just wanted to say that straight away.”

Spencer: “He’s awesome. Death Of A Dead Day is still one of my favourite metal albums of all time. Mikee pulled me in to guest on their last album [The Future In Whose Eyes?] a couple of years ago, on the song Cracks Of Light, and he was tracking me in the studio. When we got done, he mentioned that he’d love to have us collaborate on something again soon. I said that if there was ever a Periphery song with a section that needs you, absolutely. To have someone that I grew up listening to on our album is very special, and for him to be narrating that part with that sick voice that he can do is a real coup for us. And he’s one of the sweetest human beings that you can ever meet.”

Jake: “His guest on the album was actually a surprise to me. I didn’t know that he was going to be on it until the final mixes and I said, ‘Hey that sounds like Mikee!’ and everyone was like, ‘Yeah, that’s because it is.’ which was great.”

Also, you’ve experimented with a choir on the record. How did that come about?

Spencer: “That was a studio choir. We have a friend called Randy who has a studio down in Salt Lake City, and he hit us up while we were making the record and said, ‘If you guys need a choir or any kind of orchestra on the new record, then make sure you hit me up.’ I started to let the idea whirl around in my head for a bit, until I thought, ‘Yeah, that would be great.’ Instead of making my voice sound different and me having to try and do all of these other voices, why don’t we just have a real one this time. I love the way that it turned out, and Randy actually ended up playing a lot of the orchestral bits that Misha [Mansoor, guitar and programming] wrote on the record. A lot of that is actually played on real instruments rather than programmed, so that was pretty cool.”

Is there a concept that runs throughout the record?

Spencer: “No, it’s not a concept record. Each individual song has its own little story and concept, but nothing that runs all the way through the record.”

Jake: “There are some melodic motifs that run throughout the record, though. But that’s the only thing, and we’ve done that throughout our career. That’s kind of a nod to Dream Theater; they have these moments that repeat on different instruments in different parts of songs or vocal lines that are sung multiple times later on in their records, so we got the idea from that, essentially.”

Periphery IV: Hail Stan is out via 3DOT Recordings and Century Media Records