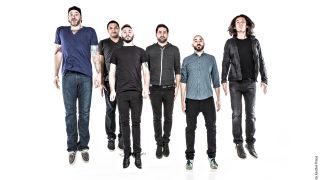 When the whole “djent” thing first came to the attention of the metal public at large, the bands involved may have had a shared love of Meshuggah, but the differences between them quickly became apparent. Cloudkicker was his own idiosyncratic beast, TesseracT were more interested in going off in expansive prog directions, Xerath (initially lumped into the same crowd) are something different entirely and Periphery follow the “prog-should-be-instantly-accessible” mantra.

Fast-forward half a decade or so and, like thrash in the late 1980s or black metal by the time Emperor released Anthems To The Welkin At Dusk in 1997, the original pioneers of the style play music that’s too different from each other to be instantly linked. One key difference, though, is that, while Emperor used Anthems… to declare ‘Emperor perform sophisticated Black Metal Art Exclusively’, embracing the label attached to them, the biggest names in technically-minded metal will steer well clear of the word ‘djent’.

“The whole djent thing… I would have embraced it a lot more had there been a bigger diversity in the music, but the problem with that whole thing was it was born on the internet,” says Periphery guitarist Jake Bowen. “It really started with Meshuggah, and they had no idea that they were starting anything, they were doing what they do, and they’re an incredible band, and no one can touch them, or come close to sounding like them. But the actual bulk of the scene started on the internet.

“What I’ve noticed is that these bands that try to be ‘djent’ only take one or two flavours from the sound, and don’t get the fact that it’s way more dense than that. So you’ll only hear two types of things happening in a lot of mediocre djent bands’ music, and it’s not engaging enough and it sounds like everything else. I think that’s the mistake that these djent bands are making; they’re taking the groove aspect and the low-tuned riffing aspect, then putting some sort of clean guitar passage over it, then they write ten songs like that and call it an album. There’s a lot more to it than that.”

Periphery themselves have evolved well beyond any comparisons to the “djent” generic conventions (the rhythms from Destroy Erase Improve, the guitar tone from Nothing, ethereal clean guitar lines, and the “singy bit, screamy bit” formula Fear Factory pioneered back when Meshuggah were basically a thrash band gone mad). They have a style that’s very much their own. So what is the “more” they were talking about before?

“That’s where our vocalist comes in, that’s where the sense of melody comes in – and we’re trying to deviate from our habits melodically too,” Jake continues. “That’s another big thing; I think a lot of people… even me, actually, to use an example from recording [new double album] Juggernaut. I was writing a lot of stuff in a certain tonality, and Mark [Holcomb, guitar] and Misha [Mansoor, guitar] said, ‘Jake, you should write some darker stuff. All the stuff you write is really melodic and pretty.’ They wanted to hear what my interpretation of darker stuff would sound like, and I did that, and they really liked it. So we have each other to help us not fall into the same pitfalls that other bands might, where they’re not even aware that they’re doing the same thing over and over again.”

Periphery’s evolution was always likely to be divisive. While Juggernaut is comfortably their best music so far, vocalist Spencer Sotello sounding far more integrated to the music than before and helping articulate the atmosphere extremely well, the fanbase for technical music may not universally appreciate the less jazz-tastic approach. It may still be technical and intricate and intelligent, but the virtuoso aspect is far less front and centre – and, given that virtuosity was something djent fans cited as a key appeal at the movement’s birth, it’s understandable they might not like this so much.

Jake is aware that some have been left behind, and while he is thoroughly unapologetic about their evolution (“Periphery can do whatever Periphery wants” appears to be the mantra), he does have some sympathy for fans who have seen a band they were crazy about move into a stylistic territory they’re not keen on.

“It’s happened to me too, man! It’s happened to everybody,” he says. “A perfect example is Metallica. They’re never going back, they’re never going to write another …And Justice For All, but that’s OK. They did exactly what they wanted to do. They changed their style, and they’re happy about it. I don’t think they have any regrets. It’s just the way things work. I think people get varying degrees of frustrated about it. For me, I’m just like, ‘All right, that was nice while it lasted,’ while other people are straight to the internet and commenting about how much we suck, and how the first album was better. If any of us in Periphery put on the first album, we’d be like, ‘Urgh! Turn it off! We don’t want to listen to this any more!’ We still play the old stuff occasionally on tour, but we’re over it, we want new stuff. There’s not a lot of sympathy for us that we have to do this stuff every night, it’s expected. And we’re happy to play it – we want to play it, I don’t want to send the wrong idea – it’s just after doing it for a certain amount of time, it’s old stuff. It’s like eating the same dinner every night: you want to try something else.”

The direction they have taken is a subject of curiosity in and of itself. The obvious appreciation of the metal public for music that is intricate and crazy and generally headfucking over the last few years has plenty of evidence. Between The Buried And Me are bigger than ever, Gojira’s last album catapulted them to genuine superstar status, Meshuggah have a legion of new fans who discovered them through the bands they inspired, and Devin Townsend wouldn’t have brought back Ziltoid for another record of complete insanity if people hadn’t given a shit. So the pressure to simplify and smooth out is not there – in fact, it is the opposite. The fanbase that digs Periphery actively wants complexity, and being in Periphery has improved the musicianship of the members.

“Periphery get a lot of praise for being super musicians, and I’m so appreciative of that – I can’t believe that’s what people think,” says Jake. “I get to sit in front of the amp when I’m practising and listen to exactly where I’m at as a player, and I don’t think it’s that great. But I definitely have improved since I joined this band, and I’ve definitely learned a lot about the instrument, I’ve learned how to navigate it easier, I’ve learned how to record myself, I’ve learned how to tour with it and go out on stage and jump around like a monkey and still be able to play stuff. So there’s a lot of growth there, and it’s all from just being in the band, and touring. I’m very grateful that I get to do this, because I don’t know if I would practice as much if I was just a casual player.”

The band, then, are better musicians, and the external pressure to de-tech is non-existent. Yet they’ve got less technical, not more so, as time has passed. And Periphery are not alone in this; while still so virtuoso it will make your head spin, Animals As Leaders’ third album The Joy Of Motion was far happier to take the simple option when it worked rather than just being a vehicle for Tosin Abasi’s ludicrous skill, as the first album was. Similarly, TesseracT’s Altered State was much more about atmosphere and texture than first album One. Jake does have an explanation as to why his band, at least, did not enter an arms race of complex time signatures.

“We still like writing challenging things, but what we realised is that there’s a way more effective way of writing good songs using simpler parts,” he says. “There’s plenty of complex stuff to be found on our new record, but I think one of the tricks to writing a good song is figuring out that combination of notes and rhythms that makes something that would sound obvious, but hasn’t been done yet, or hasn’t had the spin that we put on it yet. I love doing stuff like that, because it’s easy to write technical stuff when you’re sitting in front of a computer and you have a click track and you can piece it together and learn how to play it after you piece it together, but to me, there’s no vibe in that. There has to this unquantifiable vibe to stuff in order for me to check it off as being good enough for Periphery, and a lot of the things that have the vibe that I’m talking about are a lot simpler.”

Perhaps the trick to avoiding sound-alike generic djent is as Jake suggests: Ditch GarageBand and write what feels right.

Pick up the new issue of Metal Hammer to read all about Periphery’s two-disc prog epic from the mouth of Misha Mansoor.