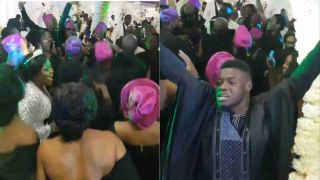 There are few things in life as painful as a bad wedding disco. The sight of drunken relatives frugging to godawful music played by cheesy DJs is usually off the embarrasment scale.

So we’ve got to hand it to guests at a recent wedding in Nigeria, who decided to get the party started by playing System Of A Down’s Toxicity.

In clip that has quickly gone viral, a roomful guests in full regalia losing their shit to the LA band’s 2001 song. Hats off to the bride for joining in the insanity while still wearing her wedding dress. And the guy in the foreground is clearly having the best night in history.

The craziness didn’t stop with System either. More footage from the same party showed Asking Alexandria’s Final Episode being greeted with an outbreak of synchronised moshing.

One person who was impressed is System Of A Down frontman Serj Tankian, who retweeted the clip with the words: "Simply awesome.”

Who are we to argue?

Rock music at Nigerian weddings needs to be normalised!! 😫😂 Love this! 😫 pic.twitter.com/b4FarEllR8June 19, 2020