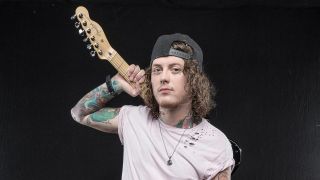 Few bands have divided metal fans like Asking Alexandria. In the decade since Stand Up And Scream announced Sheffield’s next great hellraisers to the world, guitarist Ben Bruce has seen it all, from surviving being one of the internet’s first poster children for abuse to facing down addiction and the near-implosion of his own band. This is what life has taught him…

I was born to play

“I think I was always meant to be a musician. My mum used to say I watched musicals on the TV and from the age of two or three used to play along with a tennis racket. Grease, still to this day, is one of my favourite movies. It’s amazing!”

“It’s not nice to be criticised anyway, but especially when it’s unjust. People are like, ‘You’re fat now,’ and I’m like, ‘Who the fuck are you?!’ I’m a 30-year-old man, I don’t think I’m doing too badly! ‘Well, look what you used to look like!’ Yeah, when I was a teenager! Things like that can still get under my skin depending on the mood I’m in, but you just have to take it in your stride.

If someone says, ‘I don’t like your band, they’re not for me,’ that’s fine; I don’t like lots of bands. But it’s just the childish shit. Someone said, ‘Your daughter doesn’t even look like you, I bet it’s someone else’s.’ Fuck you! What’s wrong with you? What have I done to you that’s made you so upset that you’re going to attack my children and my family life?”

The internet has ruined everything

“There are a lot of fucking idiots in the world. Before social media, not everyone had a voice, and the people that had a voice were heard because their message was powerful. Now, you could be anyone, start a Twitter account, and you have a voice all of a sudden. It’d be nice to hit the reset button and delete all social media from the internet for six months. Twitter could shut down, Facebook could shut down, and everyone could look up from their phones and go, ‘Oh, look, there’s trees outside!’”

Metal needs to catch up

“I think the rock scene in general is too far behind. It’s slow. There are a lot of stubborn people in rock in general that are like, ‘No, I don’t want things to move on, I’m happy where I am’, and you can’t be that way inclined. If you look at EDM artists, or rap artists or pop artists, they all tend to use social media to its full extent, and they are great at it. I think you’re seeing rock musicians start to take steps towards that, but I still think we’re a long way behind. But people are starting to embrace it more and find new ways to engage and interact with their online audiences.”

“When we started 10 years ago, you had to earn your stripes. That was important to me growing up in this industry and I’ve taken a lot away from that. Now I feel like bands aren’t that way inclined; they’re let out loose to do what they want. There are bands we’ve offered tours to where they’re like, ‘Well we just did this.’ All of a sudden they think they’re the shit because they’ve done this one successful headline tour. Alright, come back to me in 10 years’ time and tell me if you’re still doing these numbers. It’s so weird that bands just don’t seem to have respect any more. Bands used to work together to create packages and tours that fans would enjoy from start to finish, and create a great night. Now, no one wants to do that. Everyone’s like, ‘Nope, I’m too big for that shit, I just want to go and headline.’ Where’s this competition come from? Again, if you look at rap or EDM or anything, they help each other; they collaborate on songs, they tour with each other.”

“I think Bring Me The Horizon are a great example of this. Their last record propelled them into the mainstream, and I saw them getting a lot of flack from rock and metal bands – ‘You sold out!’ I don’t think they did. What they did do is open a doorway for more rock and metal bands to be more acceptable in the mainstream. They can take out a band like Beartooth, who are now getting to play in front of five or six thousand people a night. They’re gonna turn heads towards rock bands. So why don’t you think about that before you say ‘sell-outs’?”

“It’s funny: a lot of people that don’t know who we are write us off because they’ve heard, ‘Oh they’re that sceney-weeny breakdown band.’ Do you know what I mean? OK, we released Stand Up And Scream in 2009, and it was great, but it’s not what we sound like any more. We’ve moved on.

We’ve toured with Slipknot, we’ve toured with Avenged, Shinedown, Papa Roach… we’re a rock band now. Artists progress. It’s hard when you have a hugely successful debut album, because that is a huge staple and it’s a thing that people remember.”

I’m not the man I was

“I had a big drug problem, which was public knowledge. I was a big drinker. I used to wake up, start drinking and stop drinking when I passed out. That would be my cycle. But I don’t drink any more. I don’t do drugs. I had to make some mistakes to get where I am now, but fuck, I was a mess. I was coming home at 9am after being out drinking after recording our latest album, and my wife would be waking up with the kids as I’d be getting to bed. She said, ‘You’re missing your kids growing up. Do you know that?’”

Being a party animal is hard work

“Danny [Worsnop, Asking singer] and I were known as the Terror Twins. We were fucking horrendous. We were young and thrown in the deep end, and everyone would think, ‘That’s amazing, you lucky bastards,” but we didn’t know what we were doing. There were drugs and alcohol everywhere, people labelled us the hardest-partying band in the world, and we fed into it. That made us all quite depressed. It does terrible things to your personal life, and I think none of us are there any more.”

The music industry doesn’t care about its artists

“The industry doesn’t give a fuck about the artists – the industry cares about dollar signs. The drunker we were, the harder we were partying, the more drugs we were doing, the more they could keep us out on the road, and the more press and attention we were getting. That’s all they care about. They’re like, ‘We’ll keep feeding the machine, and it’ll keep spitting out dollars, and eventually, when shit hits the fan, the next band will come along behind them that we can do the exact same thing to.’

It’s a neverending cycle, and it’s sad, because you see people like Chester Bennington…ultimately, I believe that’s what killed him. A life-long career in the music industry. It’s depressing, and people don’t realise. People always say, ‘Thank you for saving me with your music’, but I think people don’t realise where that music comes from. He hasn’t written that song for you. Fuck yeah, it’s awesome that it’s helped you, but this has come from a very deep and personal place, and people forget that.”