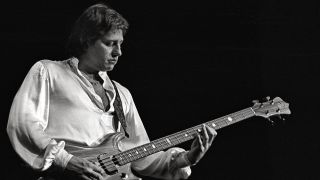 2016 has been a dark year for the world of music, and the loss of Greg Lake, the vocalist and bass player for King Crimson and Emerson Lake & Palmer makes it an even sadder year. Lake, 69, had been in a long battle with pancreatic cancer, facing his difficulties privately. His passing was confirmed by long-time manager Stewart Young, who mourned his “best friend”, adding: “Greg Lake will stay in my heart forever.”

Drummer Carl Palmer, now the only surviving member of ELP, wrote in a statement: “It is with great sadness that I must say goodbye to my friend and bandmate. Greg’s soaring voice and skill as a musician will be remembered by all who knew his music. I have fond memories of those great years we had in the 1970s and many memorable shows that we performed together. Having lost Keith Emerson this year as well has made this particularly hard for all of us. As Greg sang at the end of [ELP album] Pictures At An Exhibition, ‘death is life’. His music can now live forever in the hearts of all who loved him.”

Born in Bournemouth in 1947, at 20 Lake hooked up with local group The Gods but left before they release an album. He joined childhood friend Robert Fripp in King Crimson, lending his magisterial tones to the band’s 1969 classic debut In The Court Of The Crimson King, an album that laid the very cornerstone of what would become known as progressive rock.

It was during an US tour with Crimson that Lake struck up a friendship with Keith Emerson, who was then the keyboard player with support act The Nice. Along with drummer Palmer, formerly with the Crazy World Of Arthur Brown and Atomic Rooster, the trio formed the so-called ‘supergroup’ Emerson Lake & Palmer.

The classically influenced results would delight a legion of fans and nauseate some critics. John Peel famously declared the band’s debut gig “a complete waste of time, talent and electricity”, but ELP’s sense of the overblown made them impossible to ignore. Second album Tarkus topped the UK album chart in 1971. And though intra-band relations were at times combustible by the mid-1970s, ELP were among the biggest groups in the world.

For 1977’s triple album Works Volume 1, each band member contributed their own side of vinyl. Side Four featured a rearrangement of Aaron Copland’s Fanfare For The Common Man, an edited version of which brought the band an unexpected global hit single.

ELP lost an estimated $3 million touring Works and follow-up Works Volume 2 with an orchestra, although the latter album gave Lake with a perennial festive hit of his own in the shape of I Believe In Father Christmas.

As the 70s drew to close, the magic began to fade. 1978’s much-derided Love Beach was little more than a contractual obligation that sold poorly. It would be the trio’s final release until a reunion in the 90s, although in the mid-1980s Emerson and Lake brought in Cozy Powell as an alphabetically convenient replacement for Palmer, who was playing with Asia, and released the album Emerson Lake & Powell. Lake himself joined Asia briefly for a Japanese show in 1983 as replacement for a sacked John Wetton, though Wetton was later reinstated.

During the early 1980s, Lake teamed up with Gary Moore and released the solo albums: Greg Lake and Manoeuvres. He worked with Ringo Star in 2001 and two years later played bass on The Who’s track Real Good Looking Boy, and there were occasional solo tours. He also guested on the Trans-Siberian Orchestra’s album Night Castle in 2009. When in 2005 Classic Rock suggested to him that two solo albums wasn’t a great deal to show for almost a quarter of a century, Lake agreed.

“I don’t crave the spotlight,” he explained. “I don’t feel a duty to be publicly performing and I haven’t got any huge desire to be famous or in the public eye. I play and write all the time, but to perform I have to feel there’s a genuine motivation to do it. I’ve played thousands of shows, and after a while it’s not just about proving you can do it, it’s about doing it for a reason. When I play I like it to be really special.”

Doing just that, in July 2010 ELP performed together again for what would be the final time, at the High Voltage Festival in London. Alhough the response to the show was mixed, Lake stated: “I really wanted to go out and play a world tour.” Emerson and Palmer, however, didn’t.

Lake’s 2012 tour Songs Of A Lifetime, which featured songs of his career and those by his favourite artists, was well received. And he described it as an “honour” when Kanye West sampled the King Crimson track 21st Century Schizoid Man for his track Power, commenting: “That song [the Crimson original] still sounds modern to me. It’s as true now as it was then.”

ELP sold almost 50 million albums, and in 2013 Lake admitted that their success was founded upon the very pomposity so derided by the critics.

“There is truth in the fact that the group was pretentious,” he told Rolling Stone. “You don’t make an omelette without breaking eggs. We wanted to break boundaries, it was important for us. The early albums – Tarkus, Trilogy and Brain Salad Surgery – were really great an innovative.”

Greg Lake’s autobiography, Lucky Man, is set to be published in 2017.

“Music bows its head to acknowledge the passing of a great musician and singer, Greg Lake.” Steve Hackett

“This is another sad loss. Greg, you left some great music with us my friend and so, like Keith [Emerson], you will live on.” Rick Wakeman

“I’m so sad to hear of the passing of a musical giant in my genre. Yesterday, my dear friend Greg Lake died from cancer. RIP.” John Wetton

“Another genius has passed away. I had the privilege of working with Greg on several projects. His great talent will be sorely missed.” Geoffrey Downes