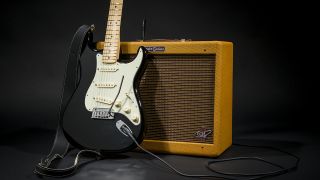 After both U2 guitarist Edge and gobsmith Bono joined the Fender board of directors back in 2014, even a newborn calf could have predicted the subsequent appearance of a number of signature instruments. And, sure enough, after the introduction of the Adam Clayton Jazz bass in 2014 and no less than two Bono Gretsch semi-acoustics (Fender haves overseen Gretsch Guitars since 2003), along comes not just a guitar but also an amp, both bearing the genial guitarist’s squiggle.

For a man who takes a veritable guitar shop on the road with him, the choice of which model to focus on for his very first signature model must have been tricky. However, after long discussions with Fender’s lauded R&D department, Edge decided on the Strat, and he road-tested nine slightly different prototypes during 2015’s Innocence + Experience tour.

Loaded with the unique combination of a DiMarzio FS-1 bridge pickup alongside two Fender Custom Shop Fat 50s single-coils, all with non-staggered pole pieces, and featuring a medium-weight alder body, it really is a great Strat, irrespective of your allegiance to the man who puts his name to it. It’s just a shame that it bears little resemblance to the classic all-black instrument Edge used on the various videos for Where The Streets Have No Name.

The Edge Deluxe amp is based on the late-50s Fender combos that accompany Edge’s mainstay 1964 Vox AC30 both on stage and in the studio. At just 12 watts output this isn’t exactly an ear-melter, but with tweaked circuitry to tighten up the bass and an all-tube design fed into a single 12-inch Celestion Alnico Blue speaker, it does sound quite stunning. A solid, hand-finished pine cabinet aids tone and robustness, and the four inputs, including two microphone jacks, are in keeping with the original vintage design.

These two beauties are available separately – the guitar comes in around £1,259, the amp is yours for £1,739 – but we can be confident that, should you give either a try, you’ll find what you’re looking for. (You’re fired – Ed.)

Eddie Van Halen Gets The Edge: Ingenuity plus talent equals a legendary tone

Eddie Van Halen has had a number of signature amps in recent years but it’s the legendary ‘Brown Sound’ guitar tone that embellished VH’s superb early albums that still charms the ears. Millions of players spent time and cash in attempts to recreate it – not helped by Ed’s habit of jovially fibbing to journalists when pressed about the secret.

There’s actually no great voodoo as to how Ed did it. In a nutshell, he hooked a 1967 Marshall Super Lead into a device called a Variac, which enabled him to drop the mains fed into the amp to around 90 volts. This forced the amp’s power tubes to work far harder to generate an operational voltage and, with the tone and volume controls set to maximum, a wonderfully fat and massively overdriven tone ensues.