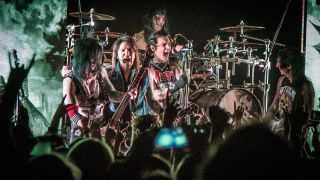 ‘They’re on stage at 8 as there’s no support,’ reads the short and urgent email from Black Veil Brides’ PR. The Garage, in the heart of London’s Highbury, is full of young fans, chanting expectantly as the stage time comes and goes, and arbitrary bursts of dry ice fill the empty stage.

Andy Biersack and his bandmates aren’t about to kill the excitement by turning up on time. Hell, no – this is a band following in the footsteps of Mötley Crüe and schooled in the art of Axl Rose’s timekeeping. When they sashay onto the stage at 9pm in a burst of super-hold hairspray and strobe lighting, the room goes wild, and Biersack has the crowd in the palm of his hand for pretty much the remainder of the set. Here’s what we learned watching one of rock’s prettiest frontmen do his stuff.

**THEY’RE BIG ON CHARISMA **With nothing more than huge, genuine smiles at the audience, the band launch into Heart of Fire. The huge, throaty voice that emanates from tiny Biersack fills the room, and every word is clear, even over the Bullet For My Valentine-esque, stomping riff. Enunciation is a powerful tool; all eyes are on the stage, the band’s tardiness is immediately forgiven, and as they play straight through into I Am Bulletproof, they look like they’re having a genuinely good time.

THEY KNOW HOW TO KEEP THE FANS SWEET After the first two songs, Biersack begins asking the crowd questions, and hands over the mic to the front row. Predictably, there are plenty of ‘I love you, Andy!’ sentiments screamed at him, which prompts many an eye-roll from the minority of over-25s. But by giving a few teenagers the chance to bellow garbled sweet nothings at him, Biersack has made their day, and isn’t the slightest bit aloof.

**IT’S ALL IN THE MELODY **The intimate setting gives BVB a chance to play around with their setlist and chuck in a few crowd-pleasers. Coffin, Let You Down and Saviour – which were left out for the Black Mass tour – all make an appearance, and their live sound has two main drivers: Christian ‘CC’ Coma’s sample-triggering double pedal, which underpins every song with a sharp, thumping beat, and their strong melodies. Even BVB newbies can sing along after the first chorus.

**THEY’RE MUSICALLY DIVERSE **Glam might be their schtick, but they’re not afraid to play with elements of prog and metal. Jake Pitts’ solos are twinkling slices of virtuoso fret-wrangling reminiscent even of Dream Theater in places, and Jinxx is a consummate violinist who isn’t afraid to bring his classical influences to the table. They nod to their influences with a cover of the Crüe’s Kickstart My Heart, but a rendition of Billy Idol’s Rebel Yell is halted mid-song when CC decides he’d rather stand up and chant ‘bacon’.

**THEY’RE UP FOR A LAUGH **Biersack refers to the gig as ‘a rehearsal situation where we can fuck around’ and ‘a focus group’, and is clearly enjoying being free of the constraints of a big arena show. After an impromptu monologue that begins with the history of the Puritans settling in America and ends with the time they shared a dressing room with Sleeping With Sirens (yes, it’s quite a jump), they launch into Sweet Blasphemy, before wrapping up with a triumphant encore of Fallen Angels and In The End. The set wasn’t without its bacon-related hiccups, and their sound would have benefitted from a bit of variation on the kick drum, but BVB know to have fun while doing ballsy glam-metal.