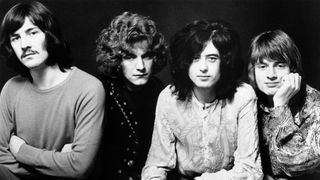 Was it a fish or a shark? Were Led Zeppelin really involved? Did it even happen at all? 47 years on, the most infamous groupie story in the annals of rock‘n’roll has finally been substantiated by a first-hand witness. Carmine Appice, legendary drummer for Vanilla Fudge, Cactus, Rod Stewart and others, reveals the truth behind what has become popularly known in Zeppelin lore as ‘The Mud Shark Incident’ in his just-published memoir, Stick It!

For those new to this particularly sordid episode, here’s a brief recap. While staying at Seattle’s Edgewater Inn in July 1969 (having shared a bill at the Seattle Pop Festival), members of Led Zeppelin and Vanilla Fudge, and their respective entourages, are alleged to have pleasured a willing groupie with a fish caught from the local bay.

It was a story that first surfaced in public on Frank Zappa’s live album, Fillmore East – June 1971, which contained a humorous ditty called The Mud Shark. It was based on Vanilla Fudge’s testimony, recounted to the Mothers when the two bands bumped into each other at Chicago airport just after the Seattle festival. “Let’s say you were a travelling rock‘n’roll band called The Vanilla Fudge / Let’s say one night you checked into the Edgewater Inn with an 8mm movie camera,” narrates Zappa, before going on to describe “a succulent young lady with a taste for the bizarre.” The song then bursts into a chorus promoting ‘The Mud Shark’ as a new dance craze set to sweep the nation.

The whole affair gathered traction in the mid ‘80s with the publication of Stephen Davis’s unauthorised Zeppelin biography, Hammer Of The Gods. In it, the band’s road manager, Richard Cole, says that he and John Bonham caught a number of fish from the window of their hotel room (the Edgewater being directly situated on Elliott Bay). Davis then describes how “one girl, a pretty young groupie with red hair, was disrobed and tied to the bed. According to the legend of the shark episode, Led Zeppelin then proceeded to stuff pieces of shark into her vagina and rectum.”

Vanilla Fudge singer Mark Stein supposedly filmed the entire thing on a Super 8 camera. Cole’s assertion that the groupie loved it – “It was nothing malicious or harmful, no way!…She might have been hit by a shark a few times for disobeying orders, but she didn’t get hurt” – doesn’t make it any more palatable.

The incident was revisited by Cole in his own book, 2002’s Stairway to Heaven: Led Zeppelin Uncensored: “Word about the escapade spread quickly. Rumours circulated that the girl had been raped…that she had been crying hysterically…that she had pleaded for me to stop…that she had struggled to escape…that a shark had been used to penetrate her. None of the stories was true.”

Much of the mythology surrounding this drama is down to the fact that Cole has a reputation for bending the truth for the sake of a juicy yarn. Referring to Hammer Of The Gods, Robert Plant told the NME in 1985 that Cole’s recollection of many events was “permanently distorted one way or another” after years of booze and drugs, adding that “he got paid a lot of money for talking crap.” Similarly, much of Cole’s autobiography was dismissed as nonsense by Jimmy Page and John Paul Jones.

All of which makes Carmine Appice’s account especially intriguing. It’s a testament to the salacious appeal of ‘The Mud Shark Incident’ that it’s already elicited plenty of column inches in the American tabloids. And a fair few over here. “First of all, a lot of people thought it didn’t happen, that it was just an apocryphal thing,” says Ian Gittins, Appice’s co-author on Stick It! “But what Carmine has done is give it complete chapter and verse. He was sitting right on the side of the bed while it was going on and he wanted to share it. Despite leading in some ways a dissolute life, Carmine has never really been a big drug-taker or big drinker, so his memory’s intact. He can remember things in excruciating detail and is an unusually fertile source. The other major account is by Richard Cole, who, by his own admission, was off his head most of the time. He doesn’t have a clear memory of it and he’s prone to exaggeration.”

If anything, this report is more disturbing than Cole’s. According to Appice, he’d hooked up with the girl a day earlier, during which time she’d performed oral sex on him in his limo. The following afternoon she called in at John Paul Jones’s room at the Edgewater, where Jones, Appice, Vanilla Fudge bassist Tim Bogert, plus Plant and wife Maureen, were hanging out. Appice had previously told her that Mark Stein had camera gear, prompting her to rush in and declare: “I want to make a movie with you guys.” She was, noted the drummer, very high. The gathering was swiftly gatecrashed by the boisterous party from next door, namely Cole, Stein, Zep roadie Clive Coulson and Fudge road manager, Bruce Wayne. Before too long the groupie lay naked on the bed, “bucking and screaming with pleasure”, as Cole started whipping her with the mud shark. All the while, Stein’s camera was rolling.

The original group decided to take their leave when Cole and Wayne shoved the thrashing animal inside her. “We had the door open and there were so many people in the room when it was happening, but she didn’t care,” Appice tells Classic Rock. “She got so into it, and it was so shocking to us, that we all started hysterically laughing. Sometimes that happens when you’re confronted with such a freaky scene. Richard and Bruce were doing their thing, with Mark trying to film it, but the rest of us filtered out into the hallway, laughing our asses off.”

Appice, looking back, points out that “you have to understand that those days were so different. It was all peace and love and women walking around with no bras and see-through blouses. It was a really crazy time, birth control pills were just coming out and, politically and socially, everything was different.”

It says much about the public’s appetite for such stories - what Gittins refers to as “the whole outlaw aspect of being a rock‘n’roll band on the road” – that this particular tale had withstood the decades, in several conflicting variants. However lurid it might be, it’s also cushioned by an enduring nostalgia for what is generally viewed as the golden age of rock. These are different times, for sure, but there remains a solid market for, as Gittins puts it, “an element of ‘guilty reading’.

“But these things happened,” Gittenb says. “And the fact that attitudes have changed doesn’t mean that what happened in the past goes away. It’s good to have them written down as a solid reminder of what shouldn’t be allowed nowadays, I suppose.”

Meanwhile, those waiting for filmed evidence of The Mud Shark Incident shouldn’t hold their breath. Mark Stein claimed to have passed on the film to Bruce Wayne, after which it disappeared. “It’s long gone,” confirms Appice. “A friend of mine, [latterday Cactus bassist] Randy Pratt, bought the film – or was told that it was the film – and there was nothing there. It was too old, he couldn’t develop it or do anything with it.”

There is an interesting, vaguely redemptive postscript to this entire business. “I started doing these weekly radio shows in the States a few years ago,” Appice explains. “One time we were talking about Fairbanks, Alaska, and this person called up claiming to be the woman. She actually spoke to my friend, the DJ on the morning show. Let’s face it, you’ve got to be either the woman or out of your mind to make that claim. But she said she had moved to Alaska, raised a family, and lived happily ever after.”

As Appice writes in his book, “I wish her well. Believe it or not, she was a nice girl.”