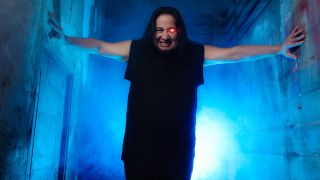 With the fifth instalment of the Terminator franchise, Terminator Genisys, in cinemas right now, and a returning Arnie stepping back into his most iconic role, we here at Metal Hammer are pretty excited. But is it any good? We decided to send Fear Factory guitarist Dino Cazares, a man who has got an opinion or two on dystopian futures himself, along to give us his thoughts on one of the biggest movie events of the year…

From day one that first Terminator movie has been a big inspiration to us in Fear Factory. The whole Skynet, rise of the machines story is something that we’ve toyed with in different ways as a band. The franchise is now something like 30+ years old, and this movie goes back to the first one – which is really kinda cool.

The story goes that Kyle Reese is sent back in time to protect Sarah Connor (as in the first one) but this is more like Back To The Future II, it’s about alternate timelines and the things you have to do to change past events. The plot is very interesting and well thought out. It shows how they were able to go back in the first movie and change the course of time, you see them build the time machine and how this changes so many of the strands in the timeline.

I was a little disappointed by the acting, I thought they could have picked a better cast. The guy who plays Kyle Reece (Jai Courtney) is not as good as the original guy. I thought the concept of bringing Arnold back was great, he plays a Terminator but because the skin on his exoskeleton is real human flesh it means he ages. That was a good way to get around it. But it also features the original Arnold from the first movie in CGI form and they re-enact the “Give me your clothes” scene. But then the old Arnold is waiting for the new Arnold – it’s a little confusing in a couple of ways… There’s quite a lot of Arnolds running around!

I think that these themes are still relevant and still worth thinking about, we are getting to the point with nanotechnology where you can have man-made human cells. Not to make a Terminator, but you’ll be able to fight cancer cells from these cells in the future. That’s the way we’re going.

If I had to score this movie I’d give it an eight out of ten. The concept was cool, a lot of the visuals and set pieces were great too and it’s awesome to see Arnold there and still doing his thing. Playing his most famous character and kicking ass. Some of the lead characters maybe don’t measure up to the previous movies, but when you go to see a Terminator movie it’s got the things here that you’ll be expecting and enjoying from all the classics.