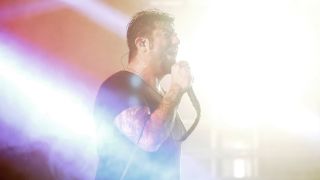 More often than not, b-sides used to be a way of releasing stuff that wasn’t good enough to appear on a full-length album.

Added value, they’d call it – and the completists among us would blindly buy all formats for reasons not entirely known.

But Deftones didn’t shovel any old crap onto the back end of their singles. They’d often use the opportunity to tip their cap to their heroes by way of a cover version shrouded in distortion and clattering beats. During their 20-year recording career, they’ve given the nod to the likes of Helmet (Sinatra), Drive Like Jehu (Caress) and The Cars (Drive).

Chino: “This is one of my favourite covers. I loved that song ever since I was growing up. It’s cool to be able to sing the songs you grew up listening to.”

“I’ve always loved Depeche Mode. We did a couple more but never released them. We recorded this during the Around The Fur sessions and it’s on a tribute album somewhere [For The Masses, 1998].”

“Weezer write flawless pop songs. I’ve been a fan since they released their first album [Weezer, 1994]. They have this wholesome American vibe around them. They’re awesome.”

“No Ordinary Love was a B-side for the Change (In The House Of Flies) single. She’s got a beautiful voice.”

“7 Words was our first ever single, and we wanted to do this song as the B-side. When I was young, I used to hold a broom handle like a microphone and stand and sing Morrissey songs. Don’t get me wrong, though. We don’t just cover ‘80s pop songs. We do Bad Brains and Suicidal Tendencies covers too!”