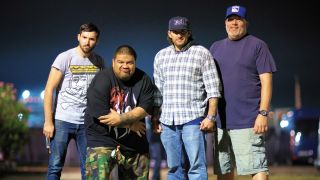 In the next of our ongoing Famous Firsts series, frontman of hardcore stalwarts Madball Freddy Cricien talks about his first records and gigs – from hip-hop to a lot of Agnostic Front!

First album you ever bought?

“I honestly didn’t buy tons of albums when I was young. I was the youngest of my siblings and they had tons of music and varied taste, and my parents had all the Latin stuff. There were days where I would just sit by the record player and check out different stuff, a little bit of everything – that’s where my love of music in general stems from. That was one of my favourite things to do at a very young age and my taste has always been diverse. Everything from Led Zep to Michael Jackson to Sugar Hill Gang to Hector Lavoe… the list goes on and on. I remember the first single I “bought” being The Show with La Di Da Di as the B-side. Outside of that it’s hard to determine what actual full album was the first. Maybe The Chipmunks’ Christmas album or something ha ha!”

First single you ever bought?

“Doug E Fresh and Slick Rick – The Show. Anyone that knows me or knows of my musical taste knows that hip-hop is one of my favourite genres. I’ve always loved hip-hop music and culture so it should come as no shocker that this would be one of my first buys.”

First gig you ever went to?

“Agnostic Front in New York City at Great Gildersleeves or A7 – one of those. This was around the time when I got into the whole hardcore scene and culture. It was a time of innocence yet violent rebellion – it’s was dangerous and amazing at the same time. That experience literally changed my life.”

First gig you ever played?

“The first time I ever sang on a stage was with Agnostic Front at Great Gildersleeves – I was seven years old. That was around 1982⁄83. First ‘official’ (or rather unofficial) Madball gig was in 1988⁄89 in New Rochelle. It was supposed to be an Agnostic Front show but something happened and bassist Craig Ahead and guitarist at Steve Martin didn’t make the gig. My bro – Roger Miret from Agnostic Front – being the resourceful guy that he is turned it into the first Madball gig. That’s why I say unofficial. Nonetheless, it was the line-up on Ball Of Destruction – our first release – which was Roger on bass, Vinnie Stigma on guitar, and Will Shepler on drums.”

How was the first Madball tour?

“The first real Madball tour was in 1992⁄93 with Agnostic Front in Europe – it was one of Agnostic Front’s last tours in Europe for many years to come (they went on hiatus for a bunch of years around that time). We did a full US tour in 1994 to promote our first LP Set It Off – I consider those to be our first legit tours. We’d played some weekends and random shows before then and in between those periods – we even went to Argentina for three shows in 1993 for what was Hoya [Roc’s, bassist] first ‘tour’. But those two tours I mentioned were legit and very significant on many levels. They put us ‘on the map’ in those two very important territories.”

Madball are touring the UK and Ireland later this month. Details in the poster below.