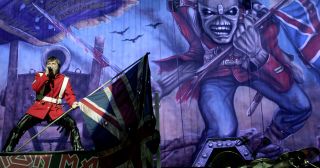 Were you a big Deep Purple fan when you were growing up?

I cut my teeth as a kid on Purple. It’s what I grew up with, what got me out of bed in the morning in terms of rock’n’roll music.

What made you choose Space Truckin’?

Ah… Metallica nicked the best song! When I heard they’d done When A Blind Man Cries I was, like, ‘Oh I would have picked that one.’ But projects like this are terrific because they’re musically very pure. There is no agenda to this, except coming in and doing a performance and making music. It’s refreshing.

How did the recording come together?

The last set of vocals I did in [producer] Kevin [Shirley]’s little bolthole studio, which is about the size of the control room. We just did it with a microphone pointing towards the wall, the legs pinned up on the wall and me, Kevin and Steve [Harris, Iron Maiden bassist] sat on the coach. I’d just go and sing the vocals and there were no isolation booths or anything like that.

Did you learn anything new about the song?

There are four verses and there’s only a couple of lines each, so there’s not a huge amount of singing, so everything is compressed in time – every word, every nuance has to count. It’s not until you get a couple of lines down that really sound like you’re there in that space, then you have to go back and re-investigate the whole performance – which is what happened. You have to sing it like this because you’re there, you’re under the skin of this song. I’ll never be under the skin as much as Ian Gillan was, because he was there at that time, but that’s what you’ve got to aspire to with a performance.

You also worked on Jon Lord’s new version of Concerto For Group And Orchestra. How long have you known the members of Deep Purple?

Ever since Ian Gillan dragged me out of the toilet unconscious at his studio. I did my first album with the band Samson [1979’s Survivors] at what was then Ian’s studio, Kingsway Recorders in Holborn. It doesn’t exist anymore. We partied exceptionally hard before going down for a playback, and Ian turned up in the middle of it and was listening away. I had to excuse myself to go and throw up in the loo, and sat there with my head down the loo for about 45 minutes, at which point Ian took pity on me and went, ‘Where’s he?… Ah there he is… drag him out, clean him up, put him in a cab, send him home.’ I’ve never forgotten that.

Was Gillan a big influence vocally?

Ian was a big vocal hero of mine. There was Ian Gillan, Arthur Brown, Ian Anderson from Jethro Tull, surprisingly enough, and a chap called Peter Hammill from Van Der Graaf Generator. They’re all in the same area of voices – they all had a ballsy sort of tenor, extended baritone thing to their voices.

What other singers inspired you?

Paul Rodgers. I just thought that Rodgers was just stunning, and I didn’t even really try and copy his phrasing because I thought you just can’t it’s just he’s just so good.

At 15 or 16 I discovered Ronnie Dio on The Butterfly Ball [a 1974 concept album, produced by Roger Glover]. I heard that on the radio somewhere and thought, Who the hell is that kind of singer? Wow what a voice! And then of course Rainbow came along with Rainbow Rising [in 1976] and I heard that and that was like, ‘Wow, I’ve got to investigate this guy because this guy can really, really sing and in a very different way to the other guys.’ Ronnie had a lovely soulful voice but it wasn’t bluesy. I never got the blues out of Ronnie in the same way I got out of Ian doing something like Lazy.

Martin worked with Purple on just about everything, and was our producer in Maiden for many years, so we’d sit down over many beers and talk to Martin and you’d get the low-down. I think it was more focused back then on creativity and what you were doing in the studio. Now touring is the only way to make any money, to make a living now. Now when people go out and tour, it’s like an endurance test – can you survive the amount of touring that’s involved now? It used to be that you toured to support the album, and the album subsidised the tour. Now it’s the other way around.

I was always a bigger Purple fan than Zeppelin. But I never saw either Zeppelin or Purple when I was a kid, when they were in their heyday. Zeppelin were adopted by American radio big-style, but I’ve got to confess that the thing I loved most about Zeppelin was their English folk roots, not their copies of American blues tracks. Ramble On is one of my favourite Led Zeppelin songs. But that’s just me.

How was it finally working with Jon Lord?

My wife was really big buddies with Jon’s wife. So way before this, I knew Jon personally. Actually, it was my first time with an orchestra. I don’t read music, and as a singer you get your own little repertoire of ad libs and things like that that your voice goes to naturally. Most of the stuff that we do with Maiden is all this standard tuning, so you do get into these well-worn grooves and patterns in your voice. So it’s nice singing a note like that, that I never normally would go to.

Does it ever feel strange that you ended up working with your teenage heroes?

When you’re 21 or 22 and your idol is in their mid-to-late-30s, it’s like ‘Hi Dad’. By the time you get to 35 and they’re 50-something it’s not ‘Hi Dad’ any more, it’s like ‘How are you doing?’ I think by the time you’ve been at it for long enough, you’ve done a few albums and you’ve done a few world tours and everything else, you share so many common experiences in terms of the way life is as a musician. Ian and these guys can tell stories and stories and stories, and frankly I would just sit up all night and never get fed up of listening to them. So many of them are similar to experiences you’ve had yourself. They’re wonderful stories. Somebody someday should write them all down, record them or do something with them.

To test your knowledge on Bruce Dickinson and Iron Maiden, then click on the link below.