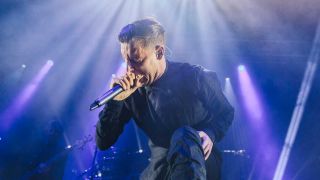 From their humble beginnings as an underground metallic hardcore band in their native Australia to the world-beating, fire shooting, metal behemoth that we all know and love today, Parkway Drive have a back catalogue most bands could only dream of. Of course, all of their albums are great, but here we try and rank them from worst to best.

While it’s clear that if Atlas was made by just about any other modern metalcore band it would be hailed as a masterpiece, this isn’t just another metalcore band we’re talking about. Parkway Drive had already perfected the formula, and Atlas suffers solely from the fact that it’s up against such exceptional competition and really brought nothing new to a band who would go on to completely re-invent themselves on their next release. Still, whack on Dark Days and then try to fathom that this is their weakest album. Skyscraper high standards.

KWAS is packed full of absolute bangers, but it’s here in the list because Parkway were only beginning to flex their creative muscles. Packed with riffs and brutal beatdowns that were a step up in terms of extremity compared to their peers – certainly a song like Guns For Show, Knives For A Pro would sit far more comfortably with a band like Bleeding Through than your average metalcore chancer. Long-time fans and purists may even argue it’s their best, but Parkway Drive are only just opening their box of tricks here.

When judging the business end of this list, we’re basically just splitting hairs. Horizons is a blockbuster of an album. Featuring some bona fide anthems like Carrion and Boneyards, and with another sterling production job from Killswitch Engage’s Adam D, this would be a many people’s choice for the top spot – it’s certainly where Parkway Drive cemented themselves alongside the premier metalcore bands. A listen to the huge rhythmic shifts and melodic guitar leads in Idols And Anchors shows why most of the competition were left choking on their dust.

Parkway Drive’s fifth album, Ire came as a shock to many, especially when they first heard the galloping singalong of opening single Vice Grip. This follow-up didn’t raise as many eyebrows as its predecessor, though Parkway showed they were still keen to stretch the boundaries of their music. The band had lost multiple friends and loved ones in the interim period, and the shadow of death hung heavy over Reverence – while the crushing Absolute Power and Prey seethed with grief-fuelled fury, it was experimental moments such as the slow and sombre Cemetery Bloom and the pitch black closing lament The Colour Of Leaving that provided the album’s most harrowing moments. A whole different strand of heavy.

With metalcore in the shitter and a slew of uninspiring fourth generation no-hopers clogging up the scene, you might have expected Parkway Drive to dip alongside the genre’s general fortunes. Not a bit of it. Deep Blue is the prime example of Parkway at their metallic hardcore best. Joe Barresi stepped into the production chair to give songs like Home Is For The Heartless and Sleepwalker more depth, clarity and a heavier edge, yet never let the band lose the furious energy that they had become famous for. And when you’ve got a song like Karma in your cannon, any idea that Parkway were losing their edge would seem absurd.

Controversial? Maybe. But we truly believe that the stylistic leap of faith that Parkway Drive made on last year’s Ire has paid off handsomely. As time progresses, this will be seen as the moment when they confirmed their future as not just a great metalcore band, but as one of modern heavy music’s definitive acts. Sure, some of their peers may have already leaned on classic rock for influence, but certainly no band associated with this type of music has ever pulled influence from Nick Cave and Tom Waits like Parkway do on Writings On The Wall. Or the Rage Against The Machine style groove on Crushed. Deny it all you want, but Ire is the sound of a band soaring well away from the box they had previously been placed in. That has to be applauded. Plus, on a simpler note, Bottom Feeder is an all-time rager. The future is bright for Parkway Drive.