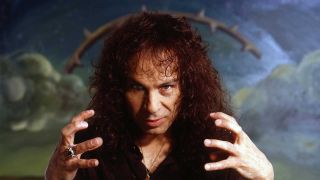 Of all the legendary heavy metal singers, Ronnie James Dio was the greatest of them all.

Born Ronald James Padavona on July 10, 1942 in Portsmouth, New Hampshire, he fronted a holy trinity of iconic bands – Rainbow, Black Sabbath and Dio. And while there were good times and bad in his lengthy career, the great man went out on a high. The last album he made before his death on May 16, 2010 was with Heaven & Hell – the band comprised of the same line-up that recorded the Black Sabbath album Mob Rules in 1981.

Dio was first introduced to the world stage in 1975 when he and three fellow members of the group Elf were absorbed into former Deep Purple guitarist Ritchie Blackmore’s Rainbow. Over three studio albums, Blackmore and Dio worked in perfect harmony, creating grandiose heavy rock enriched by Dio’s fantastic tales of sword and sorcery: a style later jokingly dubbed ‘castle rock’. But in 1978, Dio was out as Blackmore remodelled Rainbow as a mainstream radio-rock act.

Within a year, Dio had joined Black Sabbath, replacing the sacked Ozzy Osbourne. It was a controversial move: Ozzy was the people’s champion, Dio dismissed by one critic as a “standard American chest-beater”. But Dio wasn’t intimidated, his masterful performance on Sabbath’s Heaven And Hell rejuvenating a band that had been dying on its arse. It didn’t last, of course. A farcical feud over the mixing of the in-concert double Live Evil led to Dio quitting Sabbath and forming a new band in his own name.

The first Dio album, Holy Diver, was released in 1983 to universal acclaim. He went on to make another nine studio albums under the Dio name, plus the Sabbath reunion album Dehumanizer in 1992, and the Heaven & Hell album The Devil You Know in 2009.

What he left behind was a mighty legacy. Here, we rank every studio album that Ronnie James Dio made, from worst to best…

In an era when traditional heavy metal had been marginalised by alternative rock, Ronnie’s attempt to modernise the Dio sound resulted in the weakest album of his career.

Produced by Ronnie himself, the album had a vaguely grungey feel in songs such as Black and Hunter Of The Heart. And while the band – guitarist Tracy Grijalva, aka Tracy G, former Dokken bassist Jeff Pilson and stalwart drummer Vinny Appice – played heavy, Ronnie’s gift for melody had deserted him. Angry Machines was a dour and dismal record, with only one song that rose above the gloom – This Is Your Life, a piano-led ballad reminiscent of vintage Queen.

The third and final Elf album was much the same as the two that came before it. Dio sounded great – a star in the making. But there was only so much he could with this band’s rather formulaic blues-based heavy rock. There was boogie power in the opening track Black Swampy Water, and a strong melodic sensibility in Wonderworld and Streetwalker, whereas Prentice Wood could have been a Neil Diamond song.

Sadly for guitarist Steve Edwards, he was the odd man out when Ritchie Blackmore absorbed the rest of the group into Rainbow.

On this debut album, the singer used his birth name of Ronald Padavona as a gesture to his parents. After that, he would always be known as Ronnie James Dio. The album was produced by the then former Deep Purple bassist Roger Glover, and featured on guitar Dave ‘Rock’ Feinstein, Dio’s cousin, who later went on to form power trio The Rods.

There was a funky swing to songs such as Hoochie Koochie Lady and Sit Down Honey, but only brief flashes of the heavy rock that would become Ronnie’s trademark. What was clearly evident was that Ronnie was too good for this band.

Elf signed to Deep Purple’s vanity label for their second album, and also opened for Purple on a major UK tour. It wasn’t enough to make Carolina County Ball a hit, but the album was the best the band ever made.

The title track in particular had a real groove to it, and there was a blues number with a title that proved prophetic: Rainbow.

Dio’s guitarist on Killing The Dragon was Doug Aldrich, who later went on to join Whitesnake and currently stars in The Dead Daisies. Alongside him were Jimmy Bain on bass and former AC/DC drummer Simon Wright, who first played with Dio on 1990’s Lock Up The Wolves.

With Aldrich shredding like Vivian Campbell did on the band’s early albums, Killing The Dragon was very much in the classic Dio tradition, best illustrated in a powerful title track and the blazing, fast-paced Before The Fall. On the downside, there were fillers, such as Guilty, in which Ronnie was running on autopilot.

It was the last Dio album, and the band ended as it began. Master Of The Moon had Ronnie backed by Simon Wright, Jeff Pilson and Craig Goldy, the guitarist whose debut was on 1987’s Dream Evil.

There were echoes of past glories in the full-throttle opening track One More For The Road – a natural successor to We Rock – and The Man Who Would Be King, an epic with shades of Dio’s All The Fools Sailed Away and Rainbow’s Stargazer. For Dio, the band, it proved a dignified end.

Strange Highways had a darker vibe to previous Dio albums – a tone set by the doomy Jesus, Mary & The Holy Ghost and carried over into a grinding title track as doom-laden as anything that Ronnie had recorded with Sabbath.

At the turn of the 90s, Ronnie had a completely new band behind him. Following the departure of two founding members, bassist Jimmy Bain and drummer Vinny Appice, the new Dio line-up featured drummer Simon Wright, bassist Teddy Cook, keyboard player Jens Johansson and guitarist Rowan Robertson, who was just 18 at the time.

Lock Up The Wolves started impressively with Wild One, a fast, up-and-at-’em number in the vein of the debut album’s Stand Up And Shout, with Robertson ripping it up like Eddie Van Halen. Another standout track was Night Music, with Ronnie in full cry. But even he struggled to lift the overlong, plodding tracks that dominated the album.

After the mistep of Angry Machines there was another major overhaul in band personnel, with Ronnie reinstating Jimmy Bain, Craig Goldy and Simon Wright. What they created together in Magica was a heavyweight concept album and the best of Dio’s late-period works.

The singer said of the album’s narrative: “Magica is the saga of Blessing, a netherworld invaded by dark forces that vaporise people into pure, evil energy. I left the ending ambivalent because evil always exists, good doesn’t always triumph and that’s the universal balance.”

He related this tale in spoken word in the album’s 18-minute final track The Magica Story. The concept also inspired some great songs – notably Feed My Head and Turn To Stone – and from Ronnie a vocal performance to rank among his best.

The fourth Dio album had former Rough Cutt guitarist Craig Goldy in place of the departed Vivian Campbell. Otherwise, it was business as usual.

And while Dream Evil did not match the band’s first three albums, its opening track, Night People, has a pulsating energy and a heavy atmosphere, and the ballad All The Fools Sailed Away is one of the most beautiful songs that Ronnie ever sang.