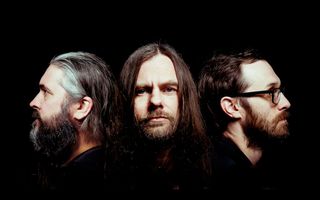 There’s that moment, when you’ve done too much of, well… something, the boughs of reality are straining as if they’re about to break, and you can sense a boundless pit where geometry fears to tread squirming just below.

Fearless and gloriously frazzled three-piece 11Paranoias - featuring current and former members of Ramesses, Bong and Capricons - have set up camp in that threshold for eight years. Now lords of the sickening lurch into amorphous, yet strangely welcoming realms of madness, they’re about to release their fourth, full-length lamentation from the vertigo-inducing precipice of reason.

Aptly titled Asterismal - in that it combines a sense of cosmic shenanigans amongst the outer limits and abject, Lovecraftian horror - it’s a plunge into a rabbit/worm-unholy-union-hole of delirious dread, riffs like the post-coital shudders of The Great Old Ones and grooves with all the ponderous momentum of the slow train to Purgatory.

Asterismal is released digitally tomorrow, March 15, via Ritual Productions, and on physical formats when the deities of pressing plants arise from their slumber, but you can thank your rotting stars because we’re streaming the full album now in all its abysmal splendour.

“Radiating a pale light of delight and trepidation we present to you, and the cosmos, our new glistening star child - Asterismal,” intone the band themselves. “Our sound, visuals and sanity have been thrust into ghastly yet achingly beautiful new dimensions and we invite you to join us on this powerful and recondite trip. Dredge your subconscious, disarm your mind and explode into the vortex that is Asterismal.

Gather your spare underwear and give yourself to the lysergic delights of Asterismal below!

Order Asterismal from Bandcamp on the stroke of midnight here