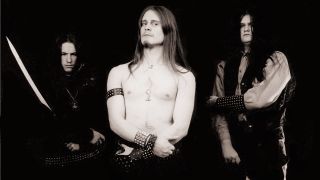 Although Enslaved have always made it clear that they never considered themselves a black metal band, their debut full-length, 1994’s Vikingligr Veldi, still stands a crucial marker point in the movement’s evolution. Originally released on Euronymous’s Deathlike Silence Productions label – albeit after the Mayhem founder and scene leader’s murder – the album’s five tracks helped usher in both an epic, synth-driven sensibility and an obsession with Norwegian landscapes and mythology while keeping the customary, festering grimness intact.

An early turning point in a career that’s been marked by exhilarating, evolutionary leaps ever since, Vikingligr Veldi is now getting its first ever vinyl release on the new By Norse Music imprint, specially remastered and with a new gatefold layout with illustrations by artist extraordinaire Zbigniew M Bielak, whose architecturally precise visions have graced albums by the likes of Ghost, Watain, Mayhem, Paradise Lost and many more.

Available as both a regular version and limited-to-150 green vinyl version available from the Enslaved webshop only, Vikingligr Veldi is an enthralling piece of extreme metal history, and we have an exclusive preview in the mesmerising form of the album’s 11-and-half-minute opening track, Lifandi Lif Undir Hamri, whose gothic undertones, alliance of sharp and woozy riffs, and strident march into the unknown still carry the first seeds of the progressive behemoths Enslaved would later become.

Lie back, think of blood-strewn Norwegian battlefields and reset your internal clocks to Lifandi Lif Undir Hamri below!

And plunder the reissue of Vikingligr Veldi, along with all manner of trinkets, at Enslaved’s webshop here!

Meanwhile, inhabitants of Vinnland can reach the US webstore here!