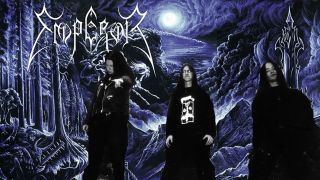 The internet seems to think In The Nightside Eclipse came out on February 21, 1994, yet anyone who was there at the time will recall the agonising delays that pushed Emperor’s hotly anticipated debut LP back throughout that year.

The record wasn’t unleashed until mid-December ’94 – 17 months after it was recorded, “under the seventh full moon anno 1993” (as specified in the liner notes) – at the end of a breathtakingly fertile year for the newly ascendant force of Norwegian black metal.

Mayhem’s De Mysteriis Dom Sathanas, Burzum’s Hvis Lyset Tar Oss, Darkthrone’s Transilvanian Hunger, debuts from Gorgoroth and Dimmu Borgir, and the first two albums by Enslaved and Satyricon all emerged in the time it took for Nightside to get its act together.

After setting the underground on fire with the Wrath Of The Tyrant demo in 1992 and an eponymous EP in ’93, the still-teenaged Emperor – guitarist/vocalist/keyboardist Ihsahn, guitarist Samoth, bassist Tchort and drummer Faust – had a lot of ground to make up, and a hell of a lot to live up to.

The album’s producer, Eirik ‘Pytten’ Hundvin – already Norwegian BM’s go- to sound man after helming recordings by Immortal, Burzum and Mayhem at Grieghallen Studios in Bergen – checked his original notes to help us pin down the reasons for Nightside’s colossal delay.

“I have been through my files from the production and can confirm that mixing was complicated,” Pytten declares.

“We had a 16-track analogue multitrack, and linked to it by [timecode-reading device] SMPTE was an Atari computer with linked midi keyboards and sound modules, probably also an 8-track digital recorder.

"This is a very time-consuming set-up to work. In addition was everyone’s high expectations of the final result, and accordingly some remixes of the songs were adding time.”

Ihsahn remembers remixing The Majesty Of The Night Sky “17 times before we were satisfied”, and as Pytten points out, it was a laborious commute for the young band; Grieghallen lies more than 200 miles west of Emperor’s home town Notodden, in Norway’s Telemark region.

Pytten confirms the final day of mastering as August 9, 1994, adding, “Approximately two weeks later all finances were settled. If my notes and memory is accurate, this is a highly acceptable time for settling an invoice!”

Aside from painstaking studio niggles, there was another, more unorthodox reason for Nightside’s delay. Shortly after recording it, three- quarters of Emperor were imprisoned for a variety of hair-raising crimes: Faust for murder, Samoth for arson and Tchort for assault.

This quartet of misanthropic souls were positioned at the dark heart of an alarming new phenomenon: the Norwegian black metal ‘Inner Circle’, a loose association of like-minded musicians whose turbulent antisocial oneupmanship quickly spiralled out of control.

In the time between Nightside’s recording and release, Mayhem guitarist Euronymous had been murdered and Burzum’s Count Grishnackh imprisoned for the crime, and Norwegian black metal had grown from a freakishly cult regional micro-scene to a thriving movement of international infamy.

Yet under all this pressure, Nightside became arguably the crowning achievement of its era – a dizzying, haunting, tempestuous masterwork pushing boundaries of composition, melody and atmosphere to make it arguably the most far-reaching artefact from Norse BM’s early years.

The band never had any doubt of their debut’s potency: “It will be a monument in black metal history,” Samoth promised in March ’94 to excellently titled Finnish zine Pure Fucking Hell.

This was a busy time for the guitarist; as well as Emperor, Samoth’s six- string bolstered releases by Arcturus, Satyricon and Gorgoroth, in addition to session bass-work for Burzum.

“It’s Samoth who had all the connections, and I tagged along!” admits Ihsahn, recalling the incestuous nature of the Norwegian scene in these early days.

“At the time extreme metal was dominated by Swedish and American bands, so maybe since we all hung out a lot, going to shows, a Norwegian identity was created. It fit better with our surroundings. In The Nightside Eclipse was very much influenced by descriptions of stuff that look very much like our Telemark nature.”

The LP’s dramatic evocation of place was signposted by its gatefold sleeve, Kristian ‘Necrolord’ Wåhlin’s moonlit panorama opening to reveal a glorious 24-inch photograph of a mountainous wooded fjord.

MTV went to Ihsahn’s home for an interview in ’94, the black-clad youth filmed stalking around conifers, gazing pensively at waterfalls and ruminating on “the winds, the rains… the wastelands, the emptiness, the silence…”

Far more than Satan, the unifying essence and motivational impetus of Nightside is the mysterious, rugged landscape of Emperor’s homeland – albeit populated by some deeply unnatural beings.

“We had a strong need for expression, so it was easy to channel that into fantasy-like images and larger-than-life sounds,” recalls Ihsahn.

“We were just as inspired by soundtracks that went along with big fantasy movies. We started out with some epicness on the first Emperor EP, but it became very obvious that we wanted to do something that was just out of this world.”

Assisting in that regard was Pytten’s Nightside production, an oppressive cacophony of barbed guitars, blitzkrieg drums and triumphing synth flourishes, heaving with apocalyptic sound effects.

Production polarised opinion from day one, some feeling alienated by the harsh, wayward blizzard of sound, others powerfully immersed in its cryptic embrace.

“Aahh, this is a tricky question,” remarks Pytten, when asked how his assessment of the finished product has changed over the years.

“With such long times working on the production, so many hours in the studio, so many replays of the songs, so many tries to get the music right, I can go on… I have to admit my first feeling was relief!

"But the way I see the album after the fatigue left me is that I have never thought, ‘Oh if I only had done so and so instead…’ I think, whatever words are put on the production, this is a captured sound that has a lasting quality. I am quite proud of what we all achieved.”

Ihsahn’s assessment from the quarter-century perspective is even more touching and heartfelt. “I think it’s the purity of it,” ponders the frontman, considering why Emperor’s debut has survived so timelessly.

“We had no commercial ambitions; there were none to have. It sounds romantic, but all this music was made purely with artistic motivations, this total, introverted, Norwegian ‘keep it to ourselves’ attitude is what enabled us to create something that no one else had done.

“I always look back at albums and think, ‘Ah, I could have changed that’, but then you go beyond that, it becomes so old that you just appreciate it for being a representation of where you were at that point. And this wasn’t just 25 years ago, it’s almost like another life, being basically a kid.

"I look back and I think, ‘What an immense privilege, to be able to so deeply get to dedicate so much time and attention to this thing called music that I love so much.’

Emperor's The Nightside Eclipse: Defining metal's most evil subgenrebasis of me being able to do this for 25 years. What a stroke of luck! It’s almost paradoxical to be so thankful for black metal, given the evilness of it all…”