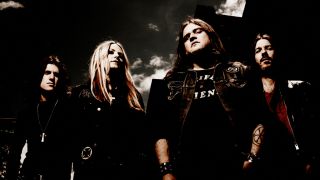 Aside from doom, Electric Wizard frontman Jus Osborn has another obsession: biker flicks. Here are his cinematic picks.

“I started watching this one when I was five years old, so it has a warm place in my heart. It’s a creepy movie and it has a great soundtrack.”

“Everything about this film is extreme. I must have seen it 20 or 30 times, at least! Some of the scenes in it are so sick. Just a brutal movie.”

“This one’s also fuckin’ brutal. You can show it to anybody; it doesn’t have a lot of the weaknesses of earlier genre stuff.”

“It’s got a good story and cool characters. The soundtrack’s also good. I just don’t like how John Cassavetes is weeping like some fuckin’ weak dude at the end.”

“I thought we were never going to see any werewolves, but they showed them in the last five minutes. Worth it.”

You can read all about Electric Wizard’s new album and the imminent apocalypse in the new issue of Metal Hammer.