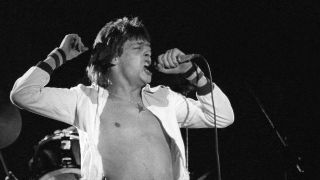 The summer of 1977 was a highwater mark for authority challenging rock, book-ended by The Sex Pistols' God Save The Queen released late in May and The Rods’ Top 10 smash two months later. It was a sweet vindication for the Canvey Islanders. After enjoying a brief music press tenure as the punk band of the moment, under their earlier name Eddie And The Hot Rods they had been quickly ditched in favour of new media favourites the Sex Pistols.

The rivalry between the bands was personal – following a showdown when the Pistols supported them at London’s Marquee club in February 1976. Egged on by manager Malcolm McLaren Johnny Rotten had attempted to square up to Rods singer Barrie Masters. Masters, a former school boxing champ, was not so easily cowed.

“I just went to give him a slap and he ran away, that was it. He was just a little boy,” Masters recalls.

On the strength of their energetic performances and classic Live At The Marquee EP, Eddie And The Hot Rods had been seen as the band to bridge the gap between the high-energy pub rock trail-blazed by their elder Canvey Island neighbours Doctor Feelgood and the oncoming amphetamine-fuelled rush of punk.

EATHR’s Live At The Marquee EP and debut album Teenage Depression (with its flagrantly drug-celebrating title track: ‘I’m spending all my money and it’s going up my nose’) had, on record at least, put the band ahead of the pack. But when the Pistols’ publicity bandwagon sidelined them, manager and lyricist Ed Hollis played his ace card.

Although Aleister Crowley – satanist, sex magician, drug fiend, the self-styled ‘most evil man in Britain’ – had died in 1947, he had already made his impression on rock culture. He was one of the figures on the cover of Sgt Pepper, and was hailed as “the unsung hero of the hippies” by ‘underground’ magazine International Times.

Jimmy Page took his fascination seriously enough to buy Crowley’s former residence on the banks of Loch Ness. But there is no more potent use of Crowley’s influence in rock than Ed Hollis's lyric for Do Anything You Wanna Do.

Taking Crowley’s dictum “Do what thou wilt shall be the whole of the law” as his starting point, Hollis wrote one of the great anthems of youthful autonomy (‘Tired of doing day job/With no thanks for what I do/Gonna be someone now I’m gonna find out who’).

“I didn’t even know who Aleister Crowley was,” Masters says. “I’d heard about it, but I was an in-your-face rock’n’roller, not into the magical mystical side of things.

“We came from a small town and there wasn’t much to do. We were bored young kids. The song means as much today as it did then: kids trying to break out of their town to find something to do, rather than being told what to do. Ed put into words what we were feeling. He’d listen to things we said and write lyrics about them.”

Unlike McLaren’s input to the Pistols’ career, Hollis’s relationship with The Hot Rods had been that of musical rather than style educator. In place of a high-fashion shop in Chelsea, Hollis had a caravan parked on a local Southend site – stocked with an encyclopaedic selection of everything from obscure early blues to arcane 60s garage punk. In those pre-download days, Hollis’s library was an all-important resource.

Future members of local bands such as The Kursaal Flyers, The Feelgoods and The Hot Rods would get a musical education there that local schools didn’t provide.

“He was one of those mad collectors who spent every penny he had on records. He read every magazine there was too. If you needed to know about any band or any song, any type of music, he was into it.”

Do Anything You Wanna Do was the first music released from the sessions for the Hot Rods’ second album, Life On The Line. The addition of guitarist Graeme Douglas from neighbouring band The Kursaal Flyers in February 1977 gave The Hot Rods a Bruce Springsteen-style lift – and provided Hollis with a new songwriting foil.

“The Hot Rods had always been a real raw live band,” Masters says. “Graeme was great for us as he added the tunefulness of The Byrds and things like that. We had the ballsy energy and he had the melodic side.

“The whole album took eight days to record and mix,” Masters recalls. “On Do Anything You Wanna Do there are a lot of guitar overdubs, but the rhythm section and the majority of the backing track were recorded in one take. Its the way we’ve always liked to work – get the feeling right and then just go for it.

“The thing we nicked from Springsteen was the idea of recording two guitars and slightly sharpening one. The result sounds like a 12 string. A great, easy idea, so we used that."

The group’s powerhouse performance is matched by Masters’s lusty and defiant vocal, which was delivered under trying circumstances: “On the day we recorded it I had a horrible toothache – I shouldn’t have been singing, really. There were two versions: one was technically right, the other had a few mistakes but felt right and that was the one that was released. I think the toothache gave me a bit more anger.”

The record’s crisp, clean, lean sound announced the arrival of producer Steve Lillywhite, who would, through his work with The Pogues, U2, Big Country and others, go on to become one of the most formidable producers in the 80s.

“Ed [Hollis] took the credit for the production but really it was Steve Lillywhite, who is credited as engineer on the record, who did it. Steve was the perfect soundboard, he knew what would work and what wouldn’t. Ed had a tendency to clutter things up. Steve was the ideal person for him to work with because he knew how to keep it simple. We’d spend the day in the studio and then Ed would stay behind messing with stuff all night. He never knew when to stop, that’s why we needed Steve there – to hold on to the reins.”

While that year’s other great Brit rock rebel rocker, God Save The Queen, will inevitably become dated, the message of Do Anything You Wanna Do is timeless. These days it seems more relevant than ever.

“When we play it now, loads of 18-25- year-olds – too young to have heard it first time round – tell us it describes how they feel. It makes me proud, you know?”