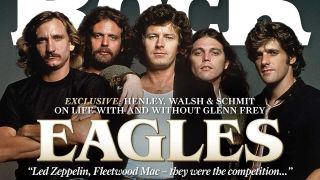 Eagles were one of the founding fathers of the genre of music that this magazine is named after, as you can read in our exclusive interview with Don Henley, Joe Walsh and Timothy B Schmit. After Glenn Frey’s unexpected death two years ago, we didn’t think we’d see the Eagles play again. And, for a good deal of time, neither did the surviving band members. But now they’re back, and an American dream continues.

Geddy Lee
Away from the spotlight he’s a family man, a serious collector – wine, basses, baseballs – and, most recently, an author. The Rush bassist/vocalist opens up in The Classic Rock Interview.

Angry Anderson
A small man with a big voice, the latter-day politician is fronting a reboot of Rose Tattoo.

Jimi Hendrix
As his landmark album Electric Ladyland celebrates its 50th anniversary, we look at what made him the first true star of a very ‘white’ scene.

Bon Jovi
The Jersey Syndicate tour of 1988/89 consolidated their status as one of the biggest bands in the world. It also took them perilously close to breaking point.

Roy Buchanan
He inspired the likes of Jeff Beck, Gary Moore and Joe Bonamassa, said no to the Stones, suffered a life of addiction, died a bluesman’s death and became a cult icon.

Creedence Clearwater Revival
How inflated egos, brotherly hate, bitter feuds, financial ruin and tragic death brought down one of the most successful bands of their era.

The Stories Behind The Songs: UFO
Doctor Doctor became a live favourite, and the live version that gave the band their signature song and biggest hit.

Buyer’s Guide: Pearl Jam
Dismissed by many as grunge interlopers, they’ve out-written, out-sold and outlived most of their detractors.

Live Previews
Must-see gigs from Killing Joke, The Night Flight Orchestra, Magnum, Bernie Tormé and The Magpie Salute. Plus full gig listings – find out who’s playing where and when.

The Soundtrack Of My Life: Ace Frehley
The former Kiss guitarist talks about the special records that are of lasting significance to him.

Classic Rock 256 is available in UK newsagents today, and is available to purchase online from MyFavouriteMagazines.