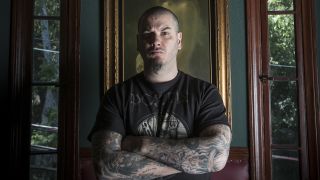 The Album I First Bought Was… Kiss – Alive

“I think it was Kiss Alive! It’s very underrated. When people listen to Kiss’s body of work and reflect on their 40-plus years, it can be a little embarrassing, but honestly that first live recording is a very powerful rock album that should not be overlooked.”

“Mercyful Fate’s first EP – the one everyone calls ‘Nuns Have No Fun’. That black and white drawing of the nun strung up on the cross with the evil characters surrounding her is pretty fucking unforgettable.”

The Album I Wish I’d Made Is… Slayer – Hell Awaits

“When Hell Awaits came out, the sound and production of metal was going through many changes. Besides Trouble, the first band that really stepped it up for crunch was Metallica with Kill ’Em All. That’s fine and all – it’s a classic record – but I’m a sucker for odes to Old Nick, so I’ll take Hell Awaits for its creativity and absolute disdain for all things Christian.”

“I’ve professed my love of The Smiths and old U2 before, but I guess the weirdest thing is Stray by Aztec Camera – it’s a pretty fucking flowery record. I don’t know how it got in my collection.”

“I’m going with my knee-jerk reaction here: the first record that pops in my head is  Vulgar Display Of Power. I don’t think there’ll be any arguments there and I think people will understand that without any explanation at all!”

“Another knee-jerk reaction here, and this could be one of many records, but Dark Angel’s Darkness Descends is one of the most relentless records in the history of fucking relentlessness. There’s a power within old-school thrash that I don’t think is better exemplified than on this record. It’s relentless and outrageous from front to back. Big thumbs-up for that one.”

The Album That Should Not Be Is… Metallica – Load

“I would have to say Load by Metallica. I mean, it’s a terrible record, man. I just don’t get it. If you’re gonna put out a record like that, just do a fucking side-project or something, ya know?”

The First Album I Had Sex To Was… Mercyful Fate – Melissa

“It was probably something like Mercyful Fate’s Melissa. It’s a toss-up between that or Slayer’s Haunting The Chapel EP. It’s hard to remember, I was very young. It could have been even earlier, something by Judas Priest… FUCK! It definitely wasn’t romantic, whatever it was!”

The Album I Want Played At My Funeral Is… U2 – War

“Well it’s a funeral environment, so let’s make it as gothic and tragic as possible. Some old U2 would be perfect, man, something like Drowning Man, which is on War. It’d also be good to make a mixtape of stuff with Asleep by The Smiths and The Child’s Right by Swans on there.”

A Kid Asks Me What Metal Is, I Hand Them A Copy Of… Judas Priest – British Steel

“I would sit him down for a good semester and go through Dr. Phil’s history of heavy metal. But honestly, as dated as it might be, no one can deny this album is 100% pure fucking heavy metal. Case in point, listen to Rapid Fire and the way Rob Halford delivers, the lyrics, the riffs… it’s the epitome and blueprint for what Slayer would bring later. You can’t go wrong with that one!”