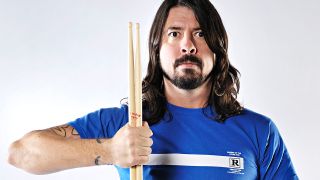 It reads like a poorly pitched film script – the kind studios would scoff at, and that a wary public would skip at the multiplex if it should somehow ever get made. It goes like this: one of the world’s biggest and most influential bands ends in a horribly violent suicide. Drummer emerges from the wreckage. He can both sing and play guitar. He releases an acclaimed debut under the guise of the Foo Fighters and before long, to all intents and purposes, takes over the world. Yes, it does sound ludicrous. But it happened.

Unlike so many of his peers, Dave Grohl wears his artistic heart on his sleeve. The Foo Fighters’ early videos gave a nod to the celluloid excesses that bands like Roth-era Van Halen pioneered: ham theatrics, strained plot lines, a lot of dressing-up. With Probot he got to indulge his heavy metal muscle. He played house drummer for Killing Joke (a dream come true for a fan like Grohl) and Queens Of The Stone Age. He joined supergroups Them Crooked Vultures – in which he must have looked up from his drums and wondered when it was that John Paul Jones considered him a musical equal – and Teenage Time Killers, where the revolving door of collaborators included everyone from Brian Baker and Jello Biafra to Corey Taylor and Neil Fallon.

It’s hard not to love Dave Grohl. No one’s having a better time than he is. He seems like the hard rock everyman who got lucky and sold out Wembley Stadium. His body of work belies that, though: he can be a considered lyricist, a crooner, an arena-rock screamer; he can rail against the world or give a history lesson; he’s a guitar hero who sometimes gets back behind the drums to remind you that it was his thunder that initially brought Nirvana’s Smells Like Teen Spirit to life.

Perhaps there’s a measure of luck in his success, but that’s only because becoming that big will always take a degree of charm, and the right turn of the card. With his lop-sided smile and impossible fringe, he’s a songwriter who is constantly trying to push the envelope and somehow advance himself still.

Here, we pick through the stand-out recordings from Dave Grohl's career.

Thirty million sold and counting, Nevermind could be considered one of rock music’s poisoned chalices. Grohl never got full credit as a songwriter on the record, but it was what he and bassist Krist Novoselic brought as a rhythm section that helped make it so powerful, gripping and enigmatic.

Grohl had already cut quite the figure among the music community in the Pacific Northwest long before throwing in his lot with Nirvana, and the precisely drilled playing displayed on songs like On A Plain and the rapid-fire Stay Away gives real credence to those claims. This great record became the ultimate calling card. View Deal

Although the Foo Fighters’ debut had promised much, few people anticipated the powerful step up that Grohl made with this follow- up. Even though he hired William Goldsmith to play drums, Grohl ousted him as soon as recording began. Gil Norton was brought in for his work with The Pixies, but the record was much tougher- sounding than them – slick, even.

Sounding like it was built with arenas in mind, it ushered in the post-grunge age with Grohl now a fully formed songwriter, and the heavily melodic groove of songs like Everlong and My Hero sat comfortably alongside the furious Monkey Wrench and the brooding Walking After You. View Deal

Floating around in demo form before Nirvana’s traumatic end, the first Foo Fighters album is a solo album of sorts – Grohl played almost everything on the record himself, with the exception of a guitar solo by Greg Dulli. And while it doesn’t hint at the stadium-eating band the Foos would become, it does showcase Grohl’s strong grasp of melody and memorable hooks.

Far less jagged than Nirvana, but still pop and punk at heart, he sounds exultant on This Is A Call, and plays the shimmering, whimsical card that is Big Me with ease. He’d only grow as a songwriter, but it was a damn good start. View Deal

Sitting behind John Paul Jones and Josh Homme, it would be easy to get lost. But Grohl never disappears from view as part of this muscular trio, a bona fide supergroup which became more than a sum of its parts – little surprise, given that all three members were naturals at playing well with others.

Built on what sounds like a series of extended jams (with the fat ultimately trimmed off), the playing is breathtaking in parts, not least Grohl’s laid-back fills that build into sudden furious, explosive trips around his kit to harry the whole thing on. View Deal

Foo Fighters - There Is Nothing Left To Lose (Roswell, 1999)

By the Foos’ third album, people were starting to wonder if Grohl could maintain a stable band line-up for more than one record – this time, the fall guy was Franz Stahl, who had joined after The Colour And The Shape. It hardly seemed to affect their output, though: while Colour epitomised Grohl’s grasp of songwriting smarts and sense of light and shade, Nothing Left To Lose was as radio-friendly as he has ever got. Canny songs like Breakout and Learn To Fly rode roughshod over radio and TV, while Stacked Actors showed just how pissed off Grohl still was at Courtney Love. View Deal

Josh Homme’s ever-shifting collective were anchored in their own universe by the time it came to record their third album. How else to explain the loose concept of a radio station playing the songs as if it were one long broadcast punctuated by an over-zealous DJ who made Murray Walker sound sedate?

With Grohl (temporarily) disillusioned with the Foos, Homme pounced and got him as drummer. It was a master-stroke, injecting steroids into the heart of their music. Watch the video for No One Knows and your eye is drawn to Grohl pounding away. View Deal

One can only imagine Grohl’s glee when he managed to green-light his own heavy metal project. Not to mention the dismay of his record company when he told them he was finally getting to duet with King Diamond. The all-star Probot gave Grohl a chance to live out his metal fanboy fantasies, giving him free rein to go back to his garage and beat the living daylights out of his kit.

A record for certain moods – like when you have to clear a dividing wall in your house – it’s at its ferocious best in the hardcore Access Babylon (featuring Corrosion Of Conformity’s Mike Dean) and the thumping, Max Cavalera-assisted Red War. View Deal

Dreams do come true, but even Grohl must have thought he was still sleeping when Killing Joke came calling. For their second self-titled album (Killing Joke do things their own way), the band were back to full strength, with Youth, Paul Raven, Geordie Walker and Jaz Coleman looking like a biker gang and sounding about as threatening too. Full credit to Grohl for finding a way to fit in with their uniquely bloody-minded noise as the band created some of their most dynamic music for years. Grohl thundered, trod lightly and played tribal parts when it was asked of him, adding fervour to songs like Blood On Your Hands and Loose Cannon. View Deal

A poke in the eye for those who thought the Foos’ best days were behind them. Perhaps it was the reintroduction of Pat Smear (the Foos now have almost as many guitarists as your average southern rock band), or Bob Mould’s cameo on Dear Rosemary, or Krist Novoselic playing bass on I Should Have Known, or maybe even Nevermind producer Butch Vig behind the glass, but the band’s 2011 album had an energy that they’d lacked in the years running up to it.

There was talk of Grohl enjoying ABBA as he wrote Wasting Light, but it’s hard to see where they might fit in among songs like the grinding White Limo or Bridge Burning. View Deal

Bizarrely bringing in Adele and Sia producer Greg Kurstin (of indie poppers The Bird And The Bee), the mission statement for Concrete And Gold was “where hard rock extremes and pop sensibilities collide, [like] Motörhead’s version of Sgt Pepper”.

The finished product was actually more like AC/DC having a crack at making their White Album, in that it was as varied, expansive and crammed with drug-crusted invention as a band embedded in blues and hard rock can get. For a record relatively light on pop-rock stadium slayers, it was also easily the Foos’ most elemental album yet, and the most cohesive, consume-in-one-sitting Foo Fighters album in a decade. With songs like Sky Is A Neighbourhood, it also cemented the idea that if Dave Grohl is an enduring icon of rocking through the hard times, we need him now more than ever.View Deal