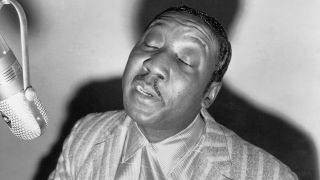 One day in March 1941, a singer from the deep south sat down in a Chicago recording studio and began a song. He remembered lying down last night, trying to take his rest, till the notion struck him to take a stroll out west. Then he veered away into another thought. ‘If I was a catfish, mama, swimmin’ deep down in the blue sea, I believe the gals now, sweet mama, ’d be settin’ out hooks for me.’ And, as if charmed with the image, he goes on repeating it, ‘settin’ out hooks for me’, until his guitar takes over, driving its own repeated riff into the listener’s head like hammer blows on a nail. More than 60 years later, Robert Petway’s Catfish Blues has become a blues standard, played by everyone from Muddy Waters and John Lee Hooker to Gary Clark Jr and the Heritage Blues Orchestra.

There are some odd things about this. Catfish live in fresh water: they have no business in the sea. And the lines about the catfish are the only ones that justify the song’s title. In the remaining verses Petway goes to church and writes his baby a letter. The catfish, you might say, is a floater – one of those stanzas that hold a sharp image, and stick in the memory, and so are constantly being hooked out of the pool of blues verse and placed in a new context. The idea behind it is a kind of boast. The catfish is a devious creature, lurking way down in the water, twitching his long whiskers, sharp-finned and well able to protect himself – but good eating if you can catch him. The singer is saying: ‘I’m trouble, ladies, but I’m worth it.’

Little is known about Robert Petway. In the only known photograph of him, in a Bluebird Records catalogue, he’s wearing overalls like a farmer. He sounds very like, and on one occasion shared a studio with, Tommy McClennan, who was from Yazoo City, Mississippi, and it’s been surmised that they were neighbours, though a researcher has recently suggested Petway may have been from northern Alabama.

No one supposes that Petway was the first blues musician to think of putting a catfish into a song. Way back in 1928, the old medicine-show entertainer Jim Jackson, composing a follow-up to his huge hit Jim Jackson’s Kansas City Blues, put in a verse wishing he was ‘a catfish swimming down in the sea – I’d have some good woman fishing after me.’ A blues singer and guitarist from Birmingham, Alabama, William Harris, promptly covered him. The phrase was out there. It just remained for Petway to net the crafty fellow and put him in a song’s title.

Six months after Petway recorded _Catfish _Blues, Tommy McClennan came to the same studio to sing his version of the theme. “I wants to make this right now,” he says over his guitar intro, chuckling. “This is the best one I got.” He begins. ‘I’m goin’, babe, I’m goin’, and cryin’ won’t make me stay, ’cos the more you cry, now, now, baby, further you drive me ’way.’ (We’ll come back to this.) Then: ‘I wish I was a bullfrog, swimmin’ in the deep blue sea – Lord, I would have all these good lookin’ women, now, now, now, fishin’ after me.’ And again the repeated phrase: ‘Fishin’ after… I mean after… sure ’nuff after me.’

A bullfrog? Perhaps he said that to distinguish his song – which was issued as Deep Blue Sea Blues – from his friend’s. And, like Petway, he seems unconcerned that the bullfrog, like the catfish, cannot survive in salt water.

Between these two versions a classic blues song is being created. Petway with his catfish has highlighted the metaphor for a cool guy, available but elusive. So elusive that most of the rest of the song is about impulsive movement – going to church, strolling out west. So is McClennan’s. He doesn’t go to church but to his baby’s house – after her husband has left. But, as he makes clear from the outset, he’s not a man for hanging round: he’s off, and ‘cryin’ won’t make me stay.’ And these images of pride and restlessness, key ideas of the blues, will be seized by singers coming after them.

It’s 1950. Muddy Waters is in the Chess studio. ‘Well, I wish I was a catfish,’ he sings, ‘swimmin’ in the deep blue sea – I would have all you good-lookin’ women fishin’ after me.’ As it happens, Muddy takes the title for his song from another image in a later verse, Rollin’ Stone, but in that first verse he has united Petway’s catfish and McClennan’s (or Jim Jackson’s) good-looking fisherwomen, and this will remain the official version.

A year later a singer named Bobo Thomas sings _Catfish Blues (I Wish I Was _A Catfish) on a Trumpet record. He is about as obscure as blues singers get, but he has two strikes in his favour: Sonny Boy Williamson II is playing on his record, and on the other side is Elmore James singing Dust My Broom for the first time. So a lot of people get to catch Bobo Thomas’ catfish.

In the same year, Muddy records another song with the same tune and structure, Still A Fool. It opens: ‘Well, now, there’s two, there’s two trains runnin’ – well, there ain’t nary one goin’ my way…’ Someone who probably hears this record is JC Cole, a singer-guitarist as mysterious as Bobo Thomas, who shows up at the Sun Studio somewhere about now to record No Right Blues (Deep Blue Sea Blues), a faithful remake of most of Tommy McClennan’s song but with no bullfrog (or catfish), ending with Muddy’s ‘two trains running’ verse.

Tributaries are forming off Catfish River, small streams of song going their own way. Two Trains Running, later to be done by Maxwell Street Jimmy Davis and John Hammond. Cryin’ Won’t Make Me Stay, which will be brilliantly transformed into a blues rap by Willie Nix as Just Can’t Stay. Muddy’s She’s Alright is another rivulet.

But the big river runs on, undepleted. John Lee Hooker’s Catfish Blues (1951) is that uncommon thing in his repertoire, a blues standard that he sings relatively straight, even with the rhymes. Lightnin’ Slim’s I’m A Rollin’ Stone (1957) is a cover of Muddy’s except that he shifts the catfish from first verse to last. In the same year Eddie Taylor picks up on another motif from the Petway song in Stroll Out West, a very old-fashioned downhome performance with the repeated line-endings – ‘take a stroll out… oh, Lord, stroll out…’ – a recurrent guitar riff and a curious, almost toneless pulse from Jimmie Lee Robinson on bass guitar. Instrumentally, it could almost be by Ali Farka Touré.

BB King did Catfish Blues on his exceptional 1960 album My Kind Of Blues – an untypically brisk reading – and Lightnin’ Hopkins more conventionally on his 1961 Bluesville LP Blues In My Bottle. There’s a recording from a 1967 gig by Jimi Hendrix, probably originally based on Muddy’s Rollin’ Stone, but seguing at the end into the title stanza from Rollin’ And Tumblin’.

Over the next 30-odd years Catfish Blues repeatedly turns up in the repertoire of older southern blues singers, from moderately celebrated ones such as Honeyboy Edwards or James “Son” Thomas to more local amateur figures such as Eddie Cusic, Cary Tate, Neal Pattman, Willie Doss and Tommy West. It would be fair to say that none of these musicians brings much new to his interpretation.

Lately, however, there have been more individual interpretations of the song. On his 2006 album Running Free the English musician Tom Doughty played a version of Catfish Blues, textually rooted in Robert Petway’s, in a slide-guitar setting with something of the shimmer of Kelly Joe Phelps. Gary Clark Jr has recently been playing a power-trio version.

Even these seem a little conventional compared to the arrangement by the Heritage Blues Orchestra on their Grammy- nominated debut album And Still I Rise. Driven by a chugging harmonica and a blaring horn section, Catfish Blues is almost a swing-dance performance. The riverbank is crowded not with people quietly fishing but with those good-looking women (and men) whirling in a catfish stomp.

We’re not saying it beats Robert Petway or Muddy Waters – theirs are still definitive soloists’ versions. But the Heritage Blues Orchestra give Catfish Blues a new, collective, social setting.