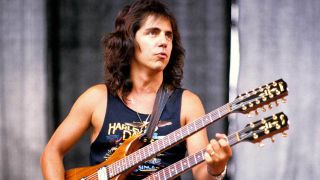 Guitar solos were dead in 1979. Radio wanted short, snappy songs that got to the point, hit you on the head with the chorus, and got outta there fast.

Jefferson Starship’s manager thought the band had a hit in the making with a song they were cutting, Jane, but he pleaded with the group to whack down Craig Chaquico’s blitzing 28-second lead guitar break.

“He even came in with a stopwatch and timed it,” Chaquico recalls. “He made his case – ‘Radio won’t play the song with a solo that long. Cut it down.’ But the band and our producer, Ron Nevison, backed me up – the solo stays.’ The song went on to become a radio smash and helped propel the album Freedom at Point Zero to platinum status. “Whenever I hear the solo to ‘Jane’ on the radio, it makes me so happy,” Chaquico says. “We fought for every second of that thing.”

The guitarist lets out a laugh and concedes that the band’s then manager was, indeed, correct about one thing: “The guys in Metallica came up to me recently at an awards show, and they said Jane was their favourite song when it came out because it was the only long guitar solo they heard on the radio. So in a way, that proved that our manager was right – radio wasn’t playing big guitar solos. We were lucky to have the only one that got through.”

Chaquico reasons that the impact and enduring appeal of the guitar solo to Jane lies partly its construction: “It was designed to stand out. The band kind of settles back and lets the solo explode. The thing goes through five octaves, from one end of the neck to the other.” He pauses, then adds, “None of which would have mattered if the solo didn’t have melody and heart. I packed a lot of feeling into each note.”

Which also describes Chaquico’s selections for five essential guitar albums. “I love to hear a player’s technique, but I also need to hear heart and soul,” he says. “A great guitar album has that ‘wow factor’ in the technique or tone, but it’s got feeling, too. It’s like listening to somebody type really fast. Are they saying anything poetic? Are they writing anything that’s worth sharing? Or is it just random words, a bunch of blabbering? A great guitarist, and a great guitar album, takes you on a journey – one worth going on.”

Below, Chaquico runs down his choices for five essential guitar albums.

“This is the first album I ever owned. John Cipollina was the lead guitarist, and he made a big impression on me. His technique with a Bigsby and a wah-wah pedal was incredible – I was definitely influenced by that. Ironically, I wound up in a band with the singer, David Freiberg – he later joined the Jefferson Airplane and he formed Jefferson Starship with all of us.

“This was a great album for me to play along to. You didn’t have to keep tuning your guitar, and the songs were easy for me to follow. John Cipollina put so much emotion in a song called The Fool – it blew me away. It was the first time I ever heard a guitar cry and scream. The whole thing was so emotive and angst-ridden, all the little clicks and scratches – everything about it was filled with feeling.”

“This is probably the most influential guitar album for me. I was babysitting with my big brother, and when he left and put the kids to bed, I grabbed his headphones and listened to a record he had. It was Jimi Hendrix. Man, it changed my life! I’d never heard somebody make a guitar sound like so many things all at once. Jimi was like a magician.

“The phrasing, the rhythms, the solos, the sounds – he was a complete guitarist, but he was also a visionary. He was a blues player, but he took it somewhere new with the psychedelic stuff. With one album, he blew a hole in the entire scene. He used feedback in a musical way, which was revolutionary. When they designed those amps, I don’t think they knew somebody like Hendrix would utilise their power in such a way.”

“I loved Carlos Santana as a guitarist, but this is also when Neal Schon was in the band. It was a little hard to tell them apart sometimes, but I think Carlos was doing more melodic work and not being so flashy. Neal would do some of the more hotshot stuff – he was very young, so he was a real acrobatic and full of energy.

“I remember walking into a studio around this time. Neal and I are roughly the same age – I don’t even think we had driver’s licenses. I heard him playing Voodoo Child, by Hendrix, and he sounded amazing, just like the record. When he was done, I said, ‘Hey, Neal, how do you do that?’ And he looked at me, thought for a second, then said, ‘Why should I tell you, man?’ I told his son that story, and he said, ‘Hey, he won’t show me stuff either!’”

“What an amazing album! The guitar playing is so tasty and melodic. I loved playing along to it. Now, the funny thing is, I didn’t know the guys were using slides. I had no idea how they were getting such smooth, bendy notes. So I just learned how to do that with my fingers. I did it for days and weeks – my fingers bled like crazy. It wasn’t till later that somebody said, ‘You know, they’re putting these things on their fingers to do that. It makes it much easier.’

“The were also influential to me in that a lot of the stuff they did was in major keys. That was a big revelation to me – there’s a major key and a minor key. One’s happy and one’s kind of sad. Duane Allman and Dickey Betts really fleshed out that melodic way of playing solos in major keys. Plus, hearing them play Les Pauls was a great introduction to that sound.”

“This is a weird and funny one. There are some fake Starship greatest hits albums out there. They’re re-recordings of our original songs, but it’s not us. Mickey Thomas is singing on the tracks, but it’s these unknown people playing the background tracks. The titles of these albums are totally misleading.

“Now, what’s strange is, this one particular album became an influential record for me, because I got to listen to what other people would do to try to sound like me. This was very interesting because I thought, ‘It’s just like when I would listen to other guitarists and try to copy them. Now here’s other people copying me!’ It was neat to hear my style being interpreted by other guys. I looked at it as a big compliment.”

Note: this embed is only available to browsers in Australia, Canada, New Zealand and the United States of America, or to those using a VPN.

Jefferson Airplane: "We had this subconscious communication on acid"