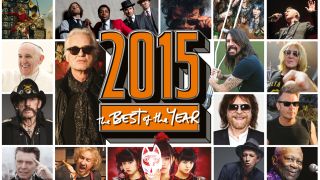 This Welcome column was all planned out. It was going be a celebration of the last 12 months in rock as the year drew to a close. And we had a lot to celebrate – as a flick through this issue proves. Just a few days ago we held the most successful Classic Rock Roll Of Honour to date at London’s Roundhouse. And so it went on…

That was the plan. Until late in the evening on Friday November 13. Two days before this issue of Classic Rock went to print, the whole world got turned upside-down. Again. And this time, devastatingly, the world of rock was inadvertently at the epicentre. I’m referring, of course, to the horrific terrorist attacks that occurred in Paris. It’s still so new, so raw, that I really don’t know what to say here. I’m not sure I ever will. The fact that 129 innocent people were murdered while simply out for a drink or meal with family and friends beggars belief.

Any loss of life is devastating, and yet these attacks hit a little closer to home for the rock community – the terrorists targeting Le Bataclan venue on the evening that Eagles Of Death Metal were playing. Eighty-nine people died there. Eighty-nine rock fans who were out to catch a band or venue staff who were simply doing their jobs. We reviewed EODM at their Bristol gig the week before (it’s on p142), before everything changed for them, for us, for everyone. Will the events of November 13 change how we think about gigs in the future? Perhaps. We ponder that with some experts on p14.

So, this wasn’t the intro I’d planned, but I do hope you enjoy our End Of Year issue. and may this holiday season be a peaceful one for you and yours.