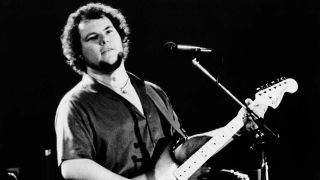 Did AOR legend Christopher Cross really fill in for Ritchie Blackmore at Deep Purple’s first ever American show? That’s the claim he makes in Greg Prato’s new book about Yacht Rock, which is published this week. The Yacht Rock Book: The Oral History of the Soft, Smooth Sounds of the 70s and 80s tells the story of soft rock through the voices of those who made it, from Walter Becker to Dave Mason and beyond.

In this excerpt, Christopher Cross talks about his grounding in electric guitar, and how he came to fill in for Blackmore at a show at The Jam Factory in San Antonio, Texas.

Playing electric guitar is not a thing that people know I do, really. I’m more known as a songwriter-singer. So that’s my time to kind of blow a little bit and have a little bit of fun with that, interacting with the players [onstage]. Not that many people know that I grew up playing guitar in Texas with Eric Johnson, Billy Gibbons, and Stevie Ray Vaughan, so it’s part of what I do.

[I was friends with] Stevie, rest his soul, and his brother Jimmie, and then of course Billy I still see quite a bit. I run into him quite a bit. Eric Johnson has been on almost every record I’ve made. He’ll be on the new one, as well. But Eric and I remain very, very close. I miss Stevie—as everybody does in Austin. But yeah, I see the guys a lot.

It would have been interesting [to have collaborated with Stevie]. He used to come out to gigs and sit in at the end. But the thing about him was he was younger. So he was sort of like ‘the kid in town.’ And people were sort of like, ‘OK, let the kid sit in at the end.’ He was so much better than everybody else. So it was amazing to watch him grow as a player. He was always pretty gifted, but it’s crazy how good he got. And I used to leave my fraternity club gigs where I played cover music and go down to the Rome Inn where Stevie was playing his own stuff. But maybe for fifty people. He was always very dedicated to what he wanted to do and didn’t ever really sort of sell out.

I had a promoter friend who I did a lot of kind of gopher work for and stuff like that. And I had a local band, and Joe [Miller] was promoting that [Deep Purple] show, at a place called the Jam Factory. It was their very first show in the United States ever and someone advised them to get flu shots. So they did, and Ritchie Blackmore got very sick. And so the decision was made that they didn’t really want to cancel the show if they could help it. And Joe Miller—who was kind of managing me at the time—said, ‘Y’know, there’s this guitarist in town who’s a big fan of Ritchie’s and he could probably step in.’

The singer [Ian Gillan] was in favour of it, I remember, but Joe pretty much ran the band and was the one that made the decision that it was better to play than not play. So I came down, and I had a Flying V and long hair, and I’m this big Ritchie fan. So we played the songs that I knew and then we jammed some blues. And they told the crowd Ritchie wouldn’t be there. It was a great moment for me. And then, when they left town, I went to the airport and got to meet Ritchie, and he thanked me for covering for him. He was cool. But what’s funny is, Eagle Rock Records, which released Dr. Faith, my last album in 2011, they have Deep Purple on the label. So Max Vaccaro, who runs the label, says he mentioned the story to Jon Lord, and Jon Lord said that never happened, ever.

So Max Vaccaro was kind of like, ‘I think you’re bullshitting.’ Eric [Johnson] had a band called Mariani at the time, and they opened the show. So when Max said Jon Lord said it didn’t happen, I called up Eric, and I said, ‘Man, is this a flashback or something? Am I imagining this?’ He goes, ‘No way. I was there. We opened and you played with them. Jon Lord’s lying.’

But it’s like I told Max later: ‘This is something that Jon Lord wanted to forget and I wanted to remember.’ Because it was a nightmare for them.

It was just horrible. Their very first show, and their star, Ritchie, was a pretty big part of it. But it’s a very cool thing.

I should probably [try to find photographic evidence of that show] at some point.

Greg Prato’s The Yacht Rock Book: The Oral History of the Soft, Smooth Sounds of the 70s and 80s is out this week, and can be pre-ordered now.

Editor’s Note: According to Setlist.FM, the show in question did not take place on Deep Purple’s debut US tour (which was in late 1968), but on the American leg of the In Rock tour, in 1970.