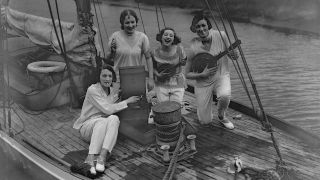 Adult Contemporary. MOR. Soft Rock. None of these easy genre titles really do it justice. Then there’s Yacht Rock, taken from the name of the 12-part US webcom aired at short film website Channel 101 up until 2010. An affectionate spoof of the mellow music that wafted from Southern California in the late ‘70s and early ‘80s, writer-director J. D. Ryznar parodied its chief architects – Hall & Oates, Christopher Cross, Steely Dan, Toto, Kenny Loggins and Michael McDonald. “I’m making fun of the songwriting process,” he told one interviewer, “but the music is generally treated pretty lovingly.”

Yacht rock could only have come from the West Coast. It was a movement that evolved from the session scene of the time, when versatile players would fetch up on each other’s recordings and inject the music with a certain silky sophistication. The music industry was booming and LA was its breezy totem: big money, big labels, celebrity parties, great weather and a seemingly endless supply of the best drugs.

Good-time living found a mirror in the smooth sounds of FM radio, where pop, soul and R&B melted into the kind of warm confections that quickly became a Californian trademark. No expense was too much for studio bosses. String orchestras were brought in, crack rhythm sections hired and the best producers given ample rein in the quest for perfectionism. The Doobie Brothers hit big with 1979’s What A Fool Believes, co-written by Loggins and McDonald. The latter also cropped up on Christopher Cross’s Ride Like The Wind, a lavish affair that rode in on a wave of disco strings and came with a flamingo on the sleeve. His chart-topping follow-up, Sailing, shored up the idea that this was music for an escapist elite, best experienced on the Pacific wearing deck shoes and a white blazer. Preferably with a cool Martini and the sun slipping over the yardarm.

For the most part, these artists sold by the boatload. Successful in their own right, Steely Dan also acted as a breeding ground for Toto (David Paich and Jeff Pocaro) and the Doobies (Jeff ‘Skunk’ Baxter and Michael McDonald). The Eagles and Fleetwood Mac translated the Dream into dollars on a massive scale for Asylum and Warner Bros. To the extent that some radio stations, like LA’s KMET and WTFM in New York, starting devoting all their airplay to this dominant strain of luxuriant rock.

Music critics tended to disparage it all, of course. Yacht rock was seen as excessive and decadent, the product of a bloated industry that was way too satisfied with itself. It had none of the sharp edges of post-punk and certainly none of its dress sense. Much less its hairstyle. Yet this was to completely miss the skill of the musicianship, the complexity of arrangements and the sheer artistic ambition of those involved.

By the mid ‘80s, yacht rock was on the wane. The emergence of indie-rock and grunge over the next decade only served to consign it to the status of a relic, an unwanted reminder of a fashion-free past. But one man’s anachronism is another’s lost treasure. The arrival of Ryznar’s online series in 2005 also coincided with a new breed of crate-digging DJs who began sampling soft-rock gems from back in the day. The clubland rise of Guilty Pleasures dedicated whole evenings to this stuff.

Perhaps most importantly, London’s Heavenly Social began a Club Yacht Rock Night (strapline: “Smooth as Hell”), introducing the era’s rich grooves and glossy allure to a generation who missed it first time round. Since its inception in 1994, the Social had served as a cultural barometer of hip. It was, after all, where The Chemical Brothers had their first residency, spinning wax alongside Andrew Weatherall, Tricky and David Holmes, while Britpop royalty (Oasis, Primal Scream, Manic Street Preachers, The Charlatans) lined the walls.

The roots of bygone California also started showing in albums by US newcomers Midlake, Ariel Pink and John Grant, alongside French contemporaries Tahiti 80 and Phoenix. None of these people were mere throwbacks. Instead their music was a smart conflation of ‘Noughties edge and old-school cool. It’s a gradual resurgence that now seems to have fully taken hold, not least through the music of big-sellers like Haim and The War On Drugs.

Meanwhile, promoter Chris Scoot has extended his Heavenly Social night into a 3-CD compilation on Universal, Yacht Rock, for which he’s curator. The Numero Group’s WTNG 89.9FM:Solid Bronze also pays tribute to the gliding sounds of the ‘70s and early ‘80s, when SoCal DJs presided over a blissed-out playlist. And Berlin label How Do You Are? has just issued a terrific set, Too Slow To Disco, that largely forgoes the obvious names for lesser-heard delights like White Horse, Rupert Holmes and the Alessi Brothers.

One of Too Slow…’s standout tracks is Get It Up For Love, a lubricious mid-‘70s beauty from Ned Doheny. The American songwriter is perhaps the keenest example of yacht rock’s second coming. A contemporary of Don Henley, J.D. Souther, Linda Ronstadt and Jackson Browne, all of whom he recorded with at one time or another, Doheny’s five albums have been in and out of print for the last couple of decades. But the recent release of Separate Oceans, a compendium that charts his first ten years in song, looks to have finally afforded him some time in the sun. The album is another product of the Numero Group, the ultra-hip Chicago label that specialises in rescuing obscurities from the past, be it eccentric soul, wayfaring folk, Southern gospel or, in this case, yacht rock. For those interested in discovering more about the airy nuances of this oft-misunderstood genre, Separate Oceans is pretty much an essential purchase. Espadrilles optional, of course.